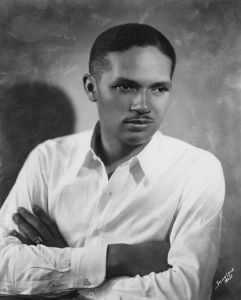 Born Robert Todd Duncan in Danville, Kentucky in 1903, Todd Duncan was the first African American to perform in an otherwise all-white cast in the New York City Opera’s production of Leoncavallo’s Pagliacci.

He began his professional stage career in 1933 in Pietro Mascagni’s Cavalleria rusticana at the Mecca Temple in New York City with the Aeolian Opera, a black opera company.  Duncan’s resounding baritone and commanding stage presence won him the role of “Porgy” in Gershwin’s 1935 Porgy and Bess. He was the personal choice of Gershwin for the role.  Following this premiere, Duncan performed his role of “Porgy” in two subsequent revivals in 1937 and 1942. Throughout his tenure as “Porgy” Duncan played the role in over 1,600 performances. His portrayal of “Porgy” is recognized as a classic, serving as the model for subsequent singers cast in the role. During one performance of Porgy and Bess at the National Theater in 1936, however, Duncan led the cast in a protest of the theater’s policy of segregated seating.   Duncan vowed to never again perform before a segregated audience.   The National Theater eventually gave in to the cast’s demands and ended its segregation policy.

A consummate performer known for his refined musical phrasing, Duncan’s abilities as a singer and actor won him roles in numerous operas and stage productions, such as Cabin in the Sky, Carmen, Rigoletto, and Lost in the Stars, and two films, Syncopation (1942) and Unchained (1955). Additionally, Duncan was an accomplished and celebrated recitalist, singing in 2,000 recitals in fifty-six countries over his twenty-five year career span. During his touring career, Duncan became the first African American concert artist to be invited to perform in Australia and New Zealand in 1946.  In 1955 Duncan became the first artist to record Unchained Melody which would later be popularized by the 1960s duo, the Righteous Brothers.

In addition to his performing career, Duncan was an accomplished music teacher. He received his bachelor’s degree from Butler University in 1925 and a master’s degree from Columbia University Teacher’s College in 1930. Duncan was on the music faculty of Howard University in Washington, D.C. from 1930 to 1945, and later taught at Curtis Institute of Music in Philadelphia.

In 1978 the Washington Performing Arts Society gave a gala in his honor on his 75th birthday.  In 1984 Duncan received the George Peabody Medal of Music from the Peabody Conservatory of Music at Johns Hopkins University.  Other awards include a medal from Haiti, a National Association for the Advancement of Colored People (NAACP) Award, the New York Drama Critics Award, the Donaldson Award and honorary doctorates from Valparaiso University and Butler University.

Robert Todd Duncan, a member of Alpha Phi Alpha Fraternity, died in his home in Washington, D.C. in 1998 at the age of 95.