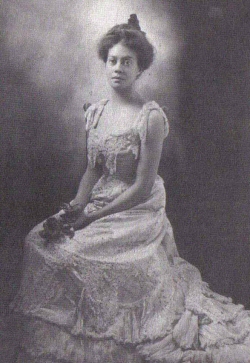 Alice Ruth Moore Dunbar-Nelson was an educator, poet, activist, and playwright. Moore was born on July 19, 1875 in New Orleans, Louisiana, into a family of mixed black, white, and Indian ancestry. Her mother, Patricia Wright, was formerly enslaved, and worked as a seamstress and washerwoman. Her father, Joseph Moore, was a white merchant marine. After attending the local school for primary education, Moore studied teaching and nursing at Straight University (now Dillard University), and graduated in 1892.

Moore taught at Old Marigny Elementary after graduation, and studied the cello and piano in her spare time. She became a writer and journalist, and wrote for the first newspaper created by and for African American women, The Woman’s Era. In 1895, Moore’s first collection of short stories and poetry titled Violets and Other Tales was published by the New Orleans magazine The Monthly Review. Her writing and photograph in the publication caught the eye of Paul Laurence Dunbar, who wrote to Moore, and the two began corresponding with each other. In 1896, Moore left New Orleans with her mother, and relocated to Boston with her sister and brother-in-law. She briefly lived in New York while teaching at Public School 83.

Moore helped to co-found the White Rose Mission in 1897, the same year she met Dunbar face to face. He proposed to her that evening, and the two secretly eloped in New York on March 6, 1898. Mrs. Dunbar left her teaching position at Public School 66, and moved to Washington, DC. In 1899, Dunbar published The Goddess of St. Rocque and Other Stories but the marriage was tumultuous and often violent. Dunbar left her husband in 1902, after he nearly beat her to death, and relocated to Wilmington, Delaware. She began teaching at Howard High School, and during the summer, Dunbar taught at the State College for Colored Students (now Delaware State College).

In 1910, Dunbar married for the second time to physician and co-founder of the Alpha Phi Alpha fraternity, Henry Arthur Callis. The marriage ended in divorce just two years later. In 1914, Dunbar co-founded the Equal Suffrage Study Club, and the following year she was a field organizer for the woman’s suffrage movement in the mid-Atlantic states. She was also co-editor and writer for the A.M.E. Review, a church publication.

On April 20, 1916, Dunbar married journalist, poet, and civil rights activist Robert J. Nelson. Dunbar-Nelson supported the NAACP and served with the Women’s Commission on the Council of National Defense and the Circle of Negro War Relief during World War I. In 1920, Dunbar-Nelson promoted anti-lynching reforms and served as executive secretary of the American Friends Inter-Racial Peace Committee (1928-1931). She moved from Delaware to Philadelphia in 1932 where she began publishing numerous poems, short stories, and essays in various publications including The Crisis, and the Journal of Negro History (JNH). She also wrote columns in the Washington Eagle and Pittsburgh Courier.

Alice Dunbar-Nelson died on September 18, 1935, in Philadelphia, Pennsylvania of heart disease at the age of 60. After her death she was named an honorary member of the Delta Sigma Theta Sorority.