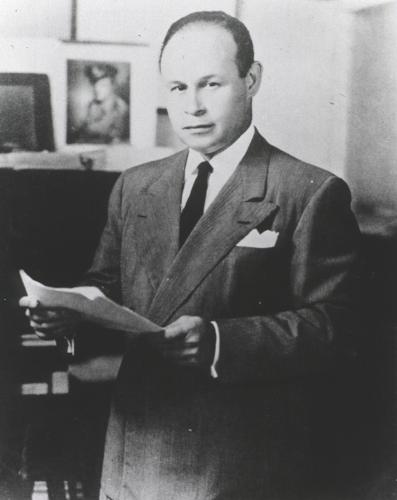 Charles R. Drew, a renowned physician and medical researcher and the first black surgeon examiner of the American Board of Surgery, revolutionized medicine by creating a system that allowed the immediate and safe transfusion of blood plasma.

Born on June 3, 1904, in Washington, D.C. to Richard T. Drew and Nora Burrell, Drew grew up in the city. He attended Dunbar High School, where his excellence in academics and athletics earned him an athletic scholarship to Amherst College in Massachusetts.

After graduating from Amherst in 1926, he worked as Director of Athletics at Morgan College. In 1929, he attended medical school at McGill University in Canada, where he studied with anatomy professor Dr. John Beattie. Drew developed his interest in blood storage just before he graduated in 1933. In 1935, Drew returned to Washington D.C. to become a professor at Howard University’s medical school. He was a member of both Omega Psi Phi Fraternity and Sigma Pi Phi Fraternity.

In 1938, the Rockefeller Foundation offered Drew a research fellowship at New York’s Columbia-Presbyterian Medical Center to study blood. While there he discovered that plasma, a pale yellow liquid without the blood cells could be stored, preserved, and used in an emergency. Shortly after receiving his Doctor of Science, he was asked to direct a pilot program for collecting, testing, and distributing blood plasma in Great Britain. During the five-month program, Drew and his associates collected blood from over 15,000 people and gave about 1,500 transfusions.

With the success of the program, Drew gained international fame and was appointed director of the first American Red Cross Plasma Bank. During World War II, he recruited 100,000 blood donors for the U.S. Army and Navy. Their blood saved the lives of thousands of wounded soldiers. Ironically, the U.S. armed forces maintained a segregated blood donation system that refused to give blood from non-whites to white soldiers. Drew denounced the policy, stating that there was no scientific evidence of difference based on race and, consequentially, and resigned his position. He returned to Washington D.C. and became the head of Howard University’s Department of Surgery and later chief surgeon at Freedman’s Hospital.

On April 1, 1950, while en route to a Tuskegee Institute (Alabama) medical conference, Drew fell asleep while driving and crashed. He was trapped in the overturned car. The vehicle’s passengers, also physicians, attended to Drew until he was taken to Alamance Hospital near Burlington, North Carolina, where he died within half an hour. He was 45 at the time of his death.

For some time a false story circulated that Drew died because white doctors at Alamance Hospital refused to treat him.  However, the other African American doctors traveling with Drew attested to the valiant but ultimately unsuccessful efforts by the white physicians to save Drew’s life.