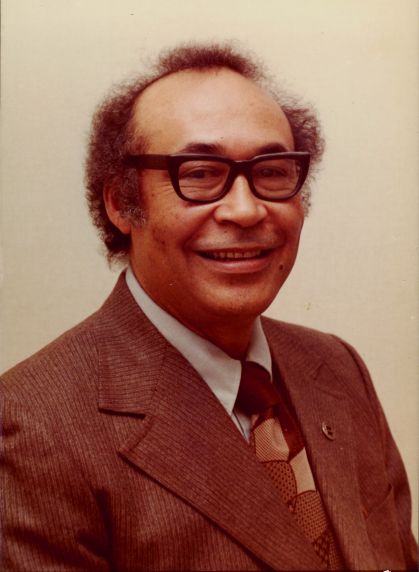 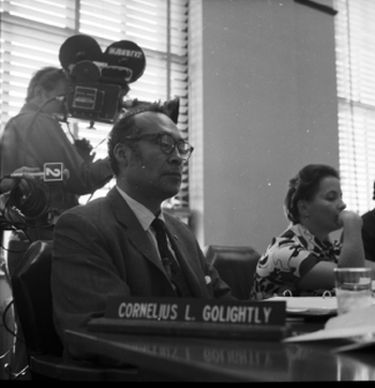 Philosopher, teacher, civil rights activist, public intellectual and educational administrator, Dr. Cornelius Lacy Golightly utilized his rich philosophical insights and commanding intellect toward the consistent aim of eradicating segregation and seeking racial harmony. The grandson of former slaves, Cornelius Lacy Golightly was born in Waterford, Mississippi, on May 23, 1917. He was one of ten children born to Richmond Mack and Margaret Fullilove Golightly. A Presbyterian minister, Rev. Richmond Mack Golightly was a native of Livingston, Alabama, while Margaret Fullilove hailed from Honey Island, Mississippi. Richmond Mack farmed land which supplemented his income as a minister.  Growing up in Waterford, a small farming community between Holly Springs and Oxford, Mississippi, Golightly was subject to early and regular encounters with racial segregation and discrimination which would have an indelible impact on his life and motivate his activism.

In 1934, 17-year-old Golightly left Mississippi for Alabama where he enrolled at Talladega College. Founded in 1867 by two newly freed slaves, William Savery and Thomas Tarrant, its mission was educating the thousands of new freedpeople in the state. Golightly excelled academically as well as in athletics. As a student-athlete, he participated in football, baseball and tennis. His reputation for academics and athletics extended far beyond Talladega. On July 9, 1938, The Carolina Times, a Black newspaper in Durham, North Carolina wrote glowingly about his participation in the “Intellectual Olympics,” which the New History Society held in New York City. Golightly was one of only five black students from across the nation to earn honors in this 1938 academic competition.

Golightly met his future (first) wife Althea Catherine Cater, at Talladega. Catherine Cater was the daughter of James Tate Cater, the Academic Dean at Talladega and a former student of Dr. W. E. B. Du Bois at Atlanta University. Catherine Cater was herself a brilliant student who majored in English and minored in philosophy. Largely due to Dean Cater’s concerted efforts, Talladega College developed a fine reputation as a strong liberal arts institution. Talladega, for example, received an evaluation of “A” from the Southern Association of Colleges and Secondary Schools in 1931, a rare designation for an all-black institution.

This stellar academic environment facilitated the development of a small core of African American students who would eventually distinguish themselves as philosophers of note. For example, Dr. Carlton L. Lee graduated from Talladega in 1933 and Dr. Broadus N. Butler in 1941. Golightly and Winston K. McAllister, a fellow philosophy major, graduated in 1938. Dr. Winston K. McAllister later assumed the chair of the philosophy department at Howard University. Both Golightly and McAllister, in the ensuing years, were members of the American Philosophical Association and serve on its Committee on the Status of Blacks in Philosophy.

After Golightly’s graduation from Talladega in 1938, he decided to study philosophy at the University of Michigan. Remarkably, Golightly completed his doctoral work in three years, earning an MA in 1939 and a Ph.D in 1941. During this period a number of African American philosophers, including Golightly, were attracted to doing scholarly work on Alfred North Whitehead. Golightly’s doctoral dissertation was on the Thought and Language in Whitehead’s Categorial Scheme. Ten years later, his first scholarly article, “Inquiry and Whitehead’s Schematic Method,” appeared in Philosophy and Phenomenological Research (June, 1951), a leading journal in the field.  After receiving his Ph.D at Michigan, Golightly did post-doctoral work as a Rosenwald Fellow at Harvard University.

Dr. Alain Locke, chair of the philosophy department at Howard University, hired Golightly as an instructor of philosophy and social science for the academic year 1942-43.  Locke was keenly aware of Golightly’s intellectual accomplishment and background partly because there were so few African American Ph.D’s in the nation at the time, and partly because of his own interest in philosophy.  Golightly fit the Howard model of scholar-activist because of his concern about how black higher educational institutions confronted the reality of Jim Crow racism. His article in the July 1942 issue of the Journal of Negro Education titled, “Negro Higher Education and Democratic Negro Morale,” explores that dilemma.  Golightly astutely remarks, “For Negro higher education to ignore the present reality of the color bar brings frustration and futility. Certainly education should not adjust Negro youth to accept the barriers of the status quo.”

Golightly’s commitment to a racially integrated world led him to serve as president of the Barnett Aden Gallery in Washington D.C. from 1942 to 1943. This gallery reflected Golightly’s social philosophy of integration, whereby African American and white artists’ works were displayed together and before an integrated gallery audience; a rare occurrence in then highly segregated Washington D.C.

Golightly remained at Howard only one academic year.  In 1943 he became a Compliance Analyst with the Fair Employment Practices Committee (FEPC), a post he held until the end of World War II in 1945. The FEPC was a consequence of Executive Order 8802, which President Franklin D. Roosevelt signed on June 25, 1941. The committee’s task was to ensure the end of racial discrimination in government employment and in those companies that had contracts with the federal government which in World War II meant thousands of employers and the millions of workers they employed.  Executive Order 8802 was the most sweeping anti-discrimination measure taken by the federal government since Reconstruction and 26-year-old Cornelius Golightly, as compliance analyst, was assigned the task of  ensuring that the original order and a second order, issued in 1943, Executive Order 9346, which specifically outlawed discrimination in federal hiring, were carried out. Golightly’s critical reflections on his work were included in a 1945 memorandum which he coauthored titled Negroes in the Federal Government and in a published article on the topic he co-wrote with John A. Davis, a leading civil rights activist. The article, “Negro Employment in the Federal Government” appeared in Phylon (October, 1945).

Golightly resumed his academic career as an academic philosopher when he was hired at Olivet College in Michigan in 1945. This faculty appointment, as professor of philosophy and psychology at this small mid-state Michigan college, marked a historic moment when Golightly became the first black philosopher permanently hired to teach at a white institution in the twentieth century.  Golightly was soon followed by black philosophers, Forest O. Wiggins (University of Minnesota) and Francis M. Hammond (Seton Hall) when both were employed in 1946, and William T. Fontaine at the University of Pennsylvania in 1947. Cold War restrictions on the faculty’s academic freedom prompted Golightly and his spouse, Catherine Cater, to leave Olivet College in protest in 1949.

Golightly was quickly hired by the Philosophy department at the University of Wisconsin at Madison, remaining there until 1955.  He then joined the faculty of the University of Wisconsin at Milwaukee working there for the next fourteen years until 1969.  Throughout this period Golightly published widely in journals such as Journal of Philosophy and Chicago Daily Law Bulletin.

Although he remained a productive scholar and leading teacher throughout his career, Golightly also became more active in community life beyond the campus.  Among his affiliations: member of the NAACP, ACLU, the Milwaukee Commission on Community Relations, and President of the Milwaukee Urban League.  In 1961, Golightly became first African American to win the city-wide election to the Milwaukee School Board (which also made him one of the earliest black elected officials in the state of Wisconsin). As board member, Golightly fought to introduce busing to promote the integration black students into school throughout the city.  Like most civil rights activists of the time, he believed black student access to the best schools in the community through racial integration would lead to significant African American economic and political progress.  Golightly, however, moved beyond most established civil rights leaders in the early 1960s when he pushed to have a federally-sponsored free breakfast program for poor students.  Unfortunately both of his efforts were blocked.

In 1969, Golightly accepted an appointment as Associate Dean and Professor of Philosophy at Wayne State University in Detroit, thus continuing his string of “firsts” by becoming the first African American to teach in the Wayne State philosophy department.  He also served in the Wayne State University administration as Associate Dean.  At Wayne State, Golightly wrote several scholarly articles. His “Ethics and Moral Activism” in The Monist (1972) was typical of his research and writing during that period.  As Associate Dean, among his numerous duties, Golightly served on the Community College Liaison Advisory Committee, Whitney M. Young Jr. Memorial Lecture Series, and the Committee on Admissions, Records, and Registration.

Golightly’s legacy as a public intellectual and social activist in the greater Detroit community is best reflected by his tenure on the Detroit School Board.  First appointed to a vacant seat in 1970, he was elected President of the Board in 1973, accordingly marking him as its first black president. Golightly remained on the Detroit Board until his untimely death in 1976. He served during a volatile period of local and national racial confrontation around busing and school integration. A steadfast proponent of busing, Golightly was at the center of the issue when federal courts ordered busing for Detroit, decisions that angered both black and white opponents of busing. Sadly Golightly never lived to see this contentious issue resolved.  He died of a brain hemorrhage in Detroit on March 20, 1976.  He was 58.  His family donated his body to the University of Michigan for medical research. To honor his legacy, the Detroit Public School system established the Golightly Career and Technical Center in September 1982, with the expressed aim to prepare “students for college and other post-secondary educational opportunities.”