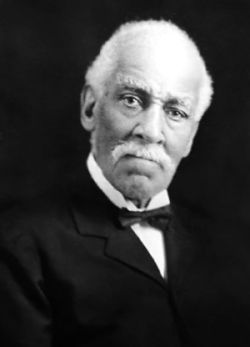 Nineteenth Century political leader George T. Downing was born on December 30, 1819 in New York, New York. The son of restaurateur Thomas Downing, he was introduced to politics at a young age. His father owned the Oyster House, which was a popular meeting place for New York politicians. When he moved to Newport, Rhode Island from New York City in the 1840s, Downing opened his own restaurant, the Sea-Girt House Luxury Hotel. Following his move to Rhode Island, he married Serena Leonora de Grasse on November 24, 1841.  The couple had six children including the inventor Philip Downing.  Henry Francis Downing, who would also become prominent in his own right, was George T. Downing’s nephew.

In addition to managing his own restaurant Downing was also the manager of the U.S. House of Representatives’ dining room in Washington, D.C.  That position afforded him, as an African American, rare contact with many prominent politicians and lobbyists in the antebellum period. This political influence would prove to be useful as he lobbied for the desegregation of Newport schools. Downing worked tirelessly on the cause from 1857 until the schools were desegregated in 1865.

Downing was also an abolitionist who was active in the Underground Railroad.  After the Civil War he turned his attention to other reforms, including labor organizing.  He was, for example, instrumental in the formation of the Colored National Labor Union in 1869.  Downing also worked with Frederick Douglass on a variety of campaigns designed to attain full civil rights for the ex-slaves.

Downing had less success in seeking office.  Although he was the wealthiest and most prominent African American in Rhode Island and considered a national black civil rights and political leader, he failed in three separate bids to be elected to the Rhode Island Assembly in the 1880s.

George Downing passed away on July 21, 1903 in Newport, Rhode Island at the age of 83.  For his contribution to politics and equal rights Downing was inducted into the Rhode Island Heritage Hall of Fame in 2003.