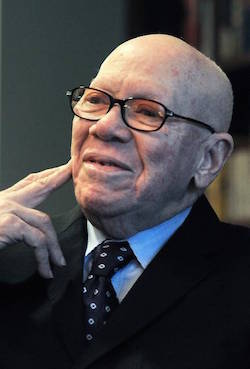 Minister, civil rights activist, vocalist, Jesse Lee Douglas, Sr. was born August 19, 1930 in New Orleans, Louisiana, to William and Isabella Douglas, a Merchant Marine cook and a maid. He attended Dillard University in New Orleans, Louisiana and Lane College in Jackson, Tennessee before obtaining his divinity degree at the Interdenominational Theological Center in Atlanta, Georgia, the city where in 1960 he, along with other area students, took action to desegregate a cafeteria frequented by state government employees. A sit-in protest resulted in arrests and the lawsuit Douglas and Reynolds vs. Vandenberg, filed on behalf of the students by the Southern Christian Leadership Conference (SCLC), which effectively ended racial separation at “all facilities at the Atlanta capitol building.”

Douglas’s albinism–fair skin, blue eyes, and blond hair–spared him from arrest in Atlanta and would be adroitly exploited in the future in the cause of civil rights for blacks in the South. In 1962, Douglas married Blanche Y. Gordon, with whom he had two sons and a daughter, and moved to Montgomery, Alabama, to pastor the First Christian Methodist Episcopal (CME) Church. The following year he was elected president of the Montgomery Improvement Association (MIA), an organization founded in 1955 in response to the Montgomery Bus Boycott and first headed by another local cleric, Rev. Martin Luther King, Jr.

It was during Douglas’s three-year tenure as MIA president (1963 to 1966) that efforts in March 1965 by MIA in conjunction with SCLC to register black voters met with resistance from state officials, unprovoked violence from Alabama state troopers, and deadly attacks on civil rights volunteers. A trusted and reliable ally of King and SCLC, Douglas again proved his value to the civil rights movement through his skillful, behind the scenes coordination of logistics that sustained the 18-day, 54-mile Selma to Montgomery marches.

Long referred to as the “unidentified white man,” a photo of Douglas during this tumultuous era (March 17, 1965) famously shows him locked arm-in-arm with King and John Lewis, then chairman of the Student Nonviolent Coordinating Committee (SNCC), leading a crowd to the Montgomery County courthouse where they negotiated protocols for protest demonstrations with city officials. Douglas was also a stirring vocalist who sang at religious gatherings and was often requested by King to set the right tone for his rousing speeches with King’s favorite gospel hymn, “If He Changed My Name.”

In 1966, Douglas left Montgomery to begin pastoring at CME churches in Birmingham, Alabama; Kansas City, Missouri; Detroit, Michigan; Chicago, Illinois; Flint, Michigan; finally retiring in 2004 at St. Luke’s CME Church in Champaign, Illinois. In 1968 he sang for the occupants of the tent city on the Washington Mall during the Poor People’s Campaign. He earned a Ph.D. in Black Church Studies at the Colgate Rochester Divinity School in 1975. In 2015, Douglas and his wife resided at a nursing home in Mint Hill, North Carolina.