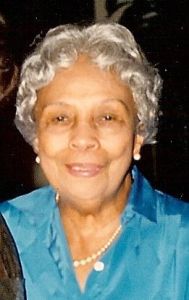 Dorothy Porter Wesley (1905-1995), a scholar-librarian and bibliographer was born in Warrenton, Virginia in 1905, to her father, Hayes Joseph Burnett, a physician, and her mother, Bertha Ball Burnett, a tennis champion.  After receiving her A.B., from Howard University in 1928, she became the first African American woman to complete her graduate studies at Columbia University receiving a Bachelors (1931) and a Masters (1932) of Science in Library Science.

Dorothy Bennett joined the library staff at Howard University in 1928, and on December 29, 1929 married James Amos Porter. In 1930 University President W. Mordecai Johnson appointed her to organize and administer a Library of Negro Life and History incorporating the 3,000 titles presented in 1914 by Jesse Moorland.  The library opened in 1933 as the Moorland Foundation.  In 1946 Howard University purchased the Arthur Spingarn Collection.  By the time Porter retired in 1973 the library, which was now called the Moorland-Spingarn Research Center, had over 180,000 books, pamphlets, manuscripts and other primary sources.  Over 43 years, Porter had successfully created a leading modern research library that served an international community of scholars.

As a scholar, avid writer and researcher, Porter developed a wide variety of research tools and authoritative bibliographies based on her vast knowledge in the field that would become known as Black Studies. A Selected List of Books by and about the Negro (1936), was one of the seeds of the field of African American Studies.  Other publications included “Early American Negro Writings: A Bibliographical Study,” published in The Papers of the Bibliographical Society of America (1945); North American Negro Poets (1945); A Working Bibliography on the Negro in the United States (1969); Early Negro Writing, 1760 to 1837 (1970); Afro-Braziliana; A Working Bibliography (1978); The Remonds of Salem, Massachusetts: A Nineteenth Century Family Revisited (1983); and William Cooper Nell: Nineteenth-Century African American Abolitionist – Historian – Integrationist; Selections From His Writings (1832-1874) (2002).

Dr. Porter has received numerous awards over her distinguished career.  In 1944 she received the Julius Rosenwald Fellowship for research in Latin American literature.  She served as a Ford Foundation consultant to the National Library in Lagos, Nigeria (1962-64), and attended the 1st International Congress of Africanists in Accra, Ghana. In 1973 she received a Ford Foundation study and travel grant which took her to Scotland, Ireland, England and Italy.  In 1974 she received the Distinguished Alumni Award from Howard University. In 1980 the Conover-Porter Award was established, it is the most prestigious award for published works of bibliography or reference on Africa.  In 1989 she received a fellowship from the W.E.B. DuBois Institute at Harvard University.  In that same year Moorland-Spingarn Research Center commenced the annual Dorothy Porter Wesley Lecture Series. In 1994 President Bill Clinton presented her with the National Endowment for the Humanities’ Charles Frankel Award.

Honorary Ph.D. degrees were bestowed on her from Susquehanna University (1971), Syracuse University (1989), and Radcliffe College (1990).  On November 29, 1979 Porter married historian Charles H. Wesley, the former President of Wilberforce and Central State Universities in Ohio.  Dorothy Porter Wesley died in Fort Lauderdale, Florida in 1995 at the age of 91.