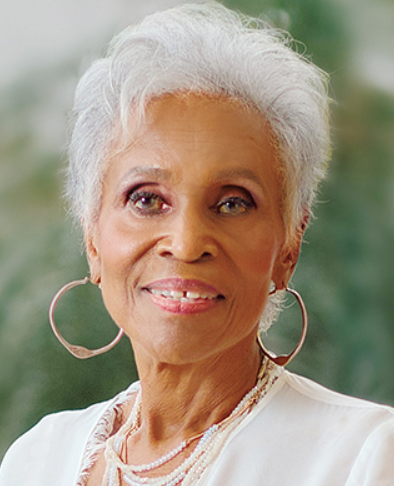 Dorothy Butler Gilliam is a journalist, editor, media educator, feminist, author, and former president of the National Association of Black Journalists. She was the first African American female reporter hired by The Washington Post. Born in the Dixie Homes Project in Memphis, Tennessee, Gilliam was the eighth child of Jessie Mae and Adee Conklin Butler, a minister for the African Methodist Episcopal (AME). Raised in a working-class black neighborhood in Louisville, Kentucky, she got her first job at the age of seventeen at the black-owned Louisville Defender where she quickly rose from typist to society editor.

Gilliam graduated from Lincoln University in Missouri, completed journalism courses at Tuskegee University in Alabama, and earned a Masters’ degree in Journalism from Columbia University in 1961. Between degrees she worked at the Tri-State Defender in Memphis where she covered the historic 1957 integration of Little Rock Central High School in Arkansas. From there she went to Chicago’s black weekly, Jet, where she worked for several years.

After graduating from Columbia, Gilliam travelled to Africa with Operation Crossroads Africa. When she returned, she was offered a position with The Washington Post. Inspired by the words of Dr. Martin Luther King Jr. to “go and make a difference,” she accepted. One of her early assignments with the Post was to cover the integration of the University of Mississippi in 1962, a life-changing experience that taught her to see the vital importance of black reporting in a white supremacist world. With the exception of a break in the mid-1960s to raise her three children with painter, Sam Gilliam, she worked at the Post for over 30 years in roles ranging from reporter, correspondent, columnist, assistant editor, and director.

In the 1970s, Gilliam co-founded the Institute of Journalism Education, now the Robert Maynard Institute, and from 1985 to 1992 she chaired its Board of Directors. She published a biography of actor and baritone concert performer Paul Robeson in 1976. From 1993 to 1995 she served as President of the National Association of Black Journalists. She is a former fellow of the Freedom Forum at the Media Studies Center at Columbia University and of the Institute of Politics at the JFK School of Government at Harvard. In 1997 she became director of the Young Journalists Development Project at the Post. In the early 2000s she was Shapiro Fellow at the George Washington University School of Media and Public Affairs and she served as Dabney Visiting Professor at Virginia Commonwealth University (VCU). In 2004 she founded Prime Movers Media, the first journalism mentorship program for disadvantaged students in urban schools.

The Washington Press Club awarded Gilliam its Lifetime Achievement Award in 2010. Gilliam published her memoir Trailblazer: A Pioneering Journalist’s Fight to Make the Media Look More Like America in 2019. Always an advocate for newsroom diversity, Gilliam continues to be vocal on the need for media to dismantle systemic racism.