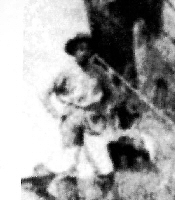 Isaiah Dorman was born free in Philadelphia, Pennsylvania in 1832.  The date of his death, June 25, 1876, however, will be both long admired by many and reviled by others in American history. On that day, this black cavalry scout died on what would later be called Reno Ridge while George Armstrong Custer and over five hundred of his comrades were annihilated by thousands of Indian warriors three miles to the north at The Battle of the Little Big Horn in southeastern Montana.

Dorman came to California as the body servant of U.S. Army officer Alfred Sully who was stationed at Monterey between 1849 and 1853.  Dorman remained with Sully, now a general, during the Civil War when he commanded U.S. Troops in the Dakota Territory   Thus by the 1870s Dorman had lived in Dakota Territory over a decade and during that time had become friends with many tribes, to the point of taking an Indian wife and befriending Chief Sitting Bull.

By the late 1860s Dorman worked as a courier, carrying messages between military forts while living with the Sioux.  He was employed by General Custer for the first time in 1873 at Ft. Lincoln, Dakota Territory, to direct forays into Indian lands. Dorman was fluent in Lakota, the language of the Sioux. In addition, and according to military records, he was paid at a higher than normal rate for his services, due to his prior experience in government, military and civilian endeavors.

Ironically an old friend, Wooden Leg, a Cheyenne warrior, was present at Dorman’s death and talked with him shortly before the scout died. The spot Dorman fell is commemorated by a small marble marker near a gully south of the Crow Agency, Montana. Isaiah Dorman stands as a indelible example of how black men defied stereotypes of both their own times and ours to achieve distinction and acclaim, even with tragic results.