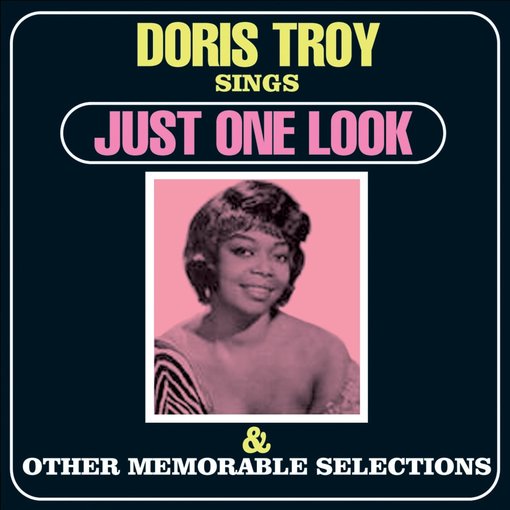 R&B Singer Doris Troy was born Doris Elaine Higginsen in Bronx, New York, on January 6, 1937. Both a singer and a songwriter, her biggest hit, “Just One Look,” was released in 1963 and peaked at no. 10 on the Billboard Hot 100 chart.

Troy’s father was a Barbadian Pentecostal minister, and she began singing in the church choir.  Her parents disapproved of R&B and rock ‘n’roll music and forbade their four children to listen to it. Despite their ban on that music, she became an usherette at the Apollo Theatre in Harlem where she heard and met many of the performers including James Brown, who was credited with “discovering” her.

In 1957, Troy formed a three-girl group named the Halos and began writing songs. A publisher paid her $100 for her song “How About That,” which became a hit for Dee Clark. To earn a steady income, Troy began singing backup and teamed with Cissy Houston and her cousins Dionne and Dee Dee Warrick for Atlantic Records in 1963. Calling themselves the Sweet Inspirations, they sang backup for The Drifters, Solomon Burke, and other established artists.

After writing “Just One Look” with Gregory Carroll in 1963, the couple took the demo to Jerry Wexler of Atlantic Records who immediately signed them. The record was released under the name Doris Troy, as Higginsen changed her name to Troy after the legendary heroine, Helen of Troy.  “Just One Look” was a smash success and was later recorded by The Hollies and Linda Ronstadt. Unfortunately, Doris Troy was never able to match her first hit.

In 1964, Troy visited London and became enamored with the British music scene. She moved to the United Kingdom in 1969 and signed with Apple Records, owned by the Beatles. Throughout the 1970s, she collaborated with British artists and developed a loyal following. She once did a live show backed on piano by Elton John, who at the time was not well-known. Troy sang backup on George Harrison’s hit, “My Sweet Lord,” Carly Simon’s “You’re So Vain,” and Billy Preston’s album That’s the Way God Planned It. Returning to the U.S. in 1974, she shared the stage with Otis Redding, Rufus Thomas, and other noted artists.

Perhaps her most memorable stage performance was in Mama, I Want to Sing, a musical she wrote along with her younger sister, Vy Higginsen, and her husband, Ken Wydro. Based on Troy’s life, the musical featured Troy playing her mother, Geraldine. When it opened at the Heckschers Theatre in Spanish Harlem on March 23, 1983, it ran for 1,500 performances before going on a national and international tour. From 1986 to 1999 the musical toured Germany, Italy and Japan, and was performed at the West End Theatre in the UK. The musical was made into a motion picture titled Mama, I Want to Sing starring Ciara, Patti LaBelle, and Hill Harper and released on DVD in 2012.

Respiratory problems forced Troy to move from New York to Las Vegas, Nevada, for the dry desert climate. She continued to perform in supper clubs and casinos. Doris Troy died of emphysema on February 16, 2004, at the age of 67 in Las Vegas.