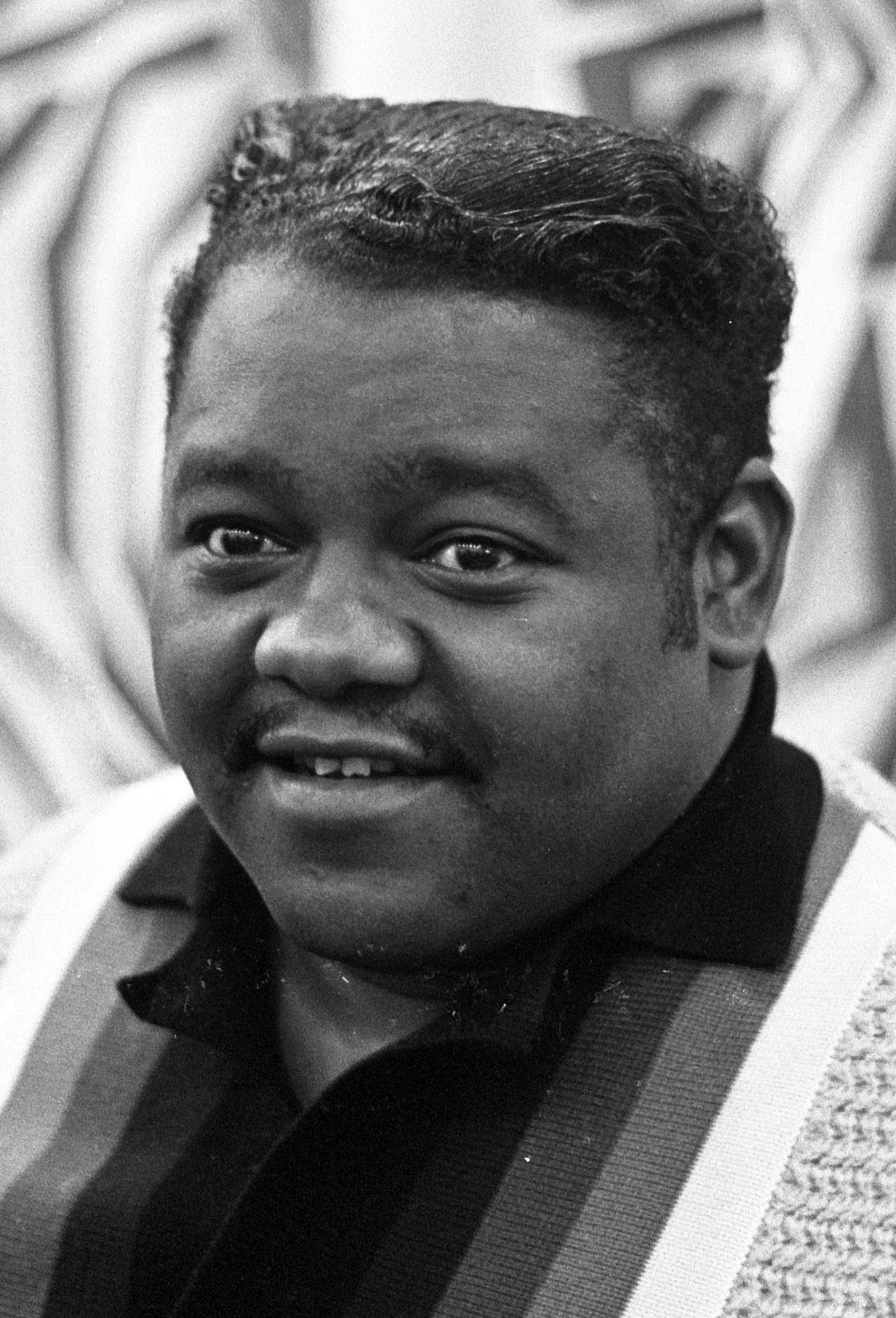 Antoine “Fats” Domino, early rock and roll musician, was born in New Orleans, Louisiana on February 26, 1928 to Antoine Domino, a former plantation worker, and Donatile Gros, a Creole of light complexion.  Fats, as he was soon called because of his weight, was raised in a large family of seven children including his four brothers and two sisters.  From a young age Fats was influenced by his father, a musician who played the banjo and fiddle.

At the age of ten, Domino began to play an old piano the family purchased, learning the instrument from his older brother-in-law Harrison Werrett, who had played in a New Orleans band.  Fats’ passion for and expertise with the piano continued to grow.  When he was fourteen he quit school and went to work as a musician.  Learning songs from jukeboxes, Domino began playing at local bars and nightclubs.

In the 1940s he joined trumpeter Dave Bartholomew’s band.  With Bartholomew’s help, Domino got a deal with Imperial Records where he recorded his first hit, “The Fat Man,” in 1949.  The song sold a million copies nationally, and is widely regarded as the first rock and roll song to sell at that level.  During the early 1950s Domino, with Bartholomew as co-writer and producer, continued to capitalize on the rising popularity of rock and roll.   As one of its earliest artists, he began to make a name for himself with “Goin’ Home” (1952) and “Going to the River” (1953).  Both records sold over a million copies.

Through the early 1950s Domino’s fame was primarily in the African American music scene.  His big breakthrough into the general (white) record market came with his Top 10 hit “Ain’t That a Shame” in mid-1955.  This song was quickly covered (recorded) by Pat Boone which helped to establish Fats Domino as a name to white teenagers.

Throughout the next five years Domino released such hits as “I’m in Love Again,” “Blueberry Hill,” and “Blue Monday,” all in 1956.  His “I’m Walkin” and “Whole Lotta Loving,” in 1957 and 1958 respectively, also added to his national popularity. His last big hit came in 1960 with “Walkin’ to New Orleans.” By that point Domino had accumulated 23 gold singles (500,000 or more sales per song). He left Imperial in 1963 and signed with ABC, Mercury, Reprise, and Warner Brothers Records but could not replicate his earlier success.

Although Fats Domino faded as a performer in the early 1960s, numerous later artists recognized his influence.  The Beatles, for example, described him as an early inspiration for much of their 1960s music.  Fats Domino continues to live in New Orleans’s Ninth Ward.  Initially thought to have died during Hurricane Katrina in 2005, he and his family were rescued by a Coast Guard helicopter and taken to Baton Rouge.  Domino eventually returned to New Orleans but not to his home which was flooded.  In 2006 he released “Alive and Kickin’,” a CD whose proceeds went to help indigent local musicians.