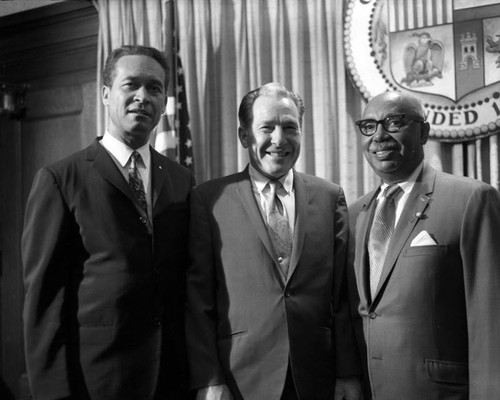 Douglas Dollarhide was the first African American mayor of the city of Compton, California, and a pioneer and role model for future black politicians across the state of California.

Dollarhide was born in March 1923 in Earlsboro, Oklahoma. He was the son of two former slaves, Thomas Dollarhide and Daisy Williams Dollarhide. In the early 1940s, the family moved from Earlsboro to San Jose, California, where Dollarhide enlisted in the U.S. Army. He served during World War II and after the conflict ended, settled in Los Angeles County with his new wife, Eliza, and daughter, Barbara.

Dollarhide attended the Metropolitan Business College, Long Beach City College, and La Salle University Law School, where he received a law degree. He was elected to Compton City Council in 1963, where he served as the first African American chairman of the council’s finance committee and represented the city at the League of California Cities. Following his three terms as city council member, Dollarhide, a Democrat, was elected as the first African American mayor of Compton in June 1969. He served one term until 1973 when he was defeated by thirty-seven-year-old Dorris Davis. During the time he served in office, the city became the first municipality in California to have a black majority; African Americans comprised 65 percent of the population by 1970.

During Dollarhide’s first few years as mayor, major changes took place in Compton. The city, like many urban areas in the nation at the time, underwent white flight—the exodus of middle-class white residents—and a corresponding influx of African Americans, many of whom had been displaced by the 1965 Watts riot (the Watts section of Los Angeles bordered Compton) and others who sought a suburban lifestyle. White flight contributed to Compton’s transformation from an overwhelmingly white city, which in the 1950s had been home to the family of future President George H. W. Bush, into a predominantly black city by the time of Dollarhide’s election. Whites who left Compton eventually ended up in surrounding suburbs, which often vowed to limit or exclude black residents. Dollarhide’s administration also had to contend with rising crime rates, which undermined the city’s reputation, forced property values down, and became the reason for more white flight.

By the 1980s, Compton had become a city best known for rap artists N.W.A., who in their 1988 album Straight Outta Compton described the consequences of two decades of social and economic deterioration. By that point, Compton was dominated by the crime and gangs described in the rap group’s controversial and provocative lyrics.

Despite the decline of Compton in the 1970s and 1980s, many California politicians remember Dollarhide as a trailblazer and pioneer for later black officeholders. The city named Compton’s Dollarhide Neighborhood Center after him. Douglas Dollarhide died at age 85 on June 28, 2008, in his home in the Northridge section of Los Angeles.