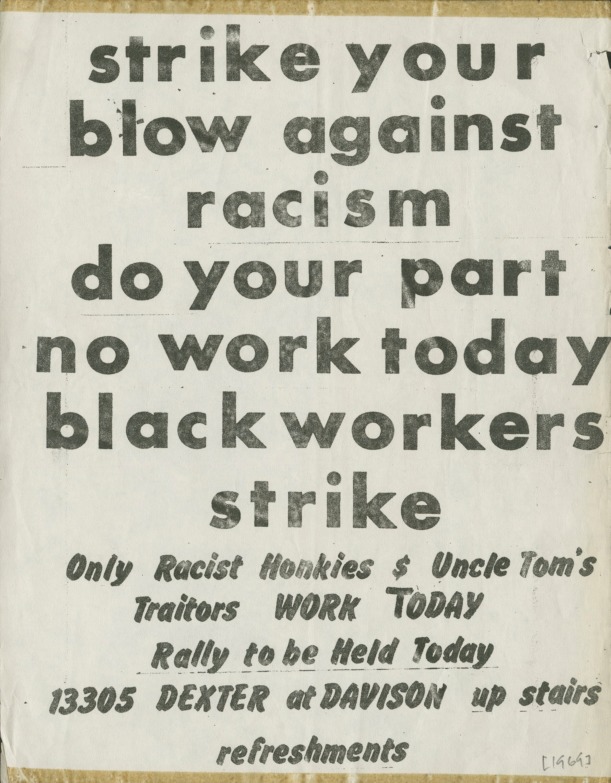 The Dodge Revolutionary Union Movement (DRUM) was a radical organization of black autoworkers in Detroit, Michigan who were dissatisfied with working conditions at Chrysler and with the response of their union, the United Auto Workers (UAW). DRUM grew out of the Black Power Movement and began just a year after the 1967 riots in Detroit. Black autoworkers were frustrated by the limits on both their economic opportunities at the plant and on their power within their union. Although black autoworkers were employed in a relatively high-paying industry, they were kept in the lowest-paying and most dangerous jobs, they were not given opportunities for advancement into management, and were most often under the supervision of older white males. They also alleged that the UAW was a racist union because it focused only on winning pay increases and did not address the discrimination black workers faced. Black autoworkers were also aware that the UAW’s leadership was almost exclusively white and male.

On May 2, 1968 in Hamtramck, Michigan, 4,000 black and white workers at the main Dodge plant of the Chrysler Corporation engaged in a wildcat strike to protest these conditions and a speedup in the production lines. Punishment for the strike fell disproportionately on black workers, with five of seven firings happening to them. DRUM was subsequently formed to turn this individual confrontation into a more lasting, organized effort with specific objectives.

In July, DRUM called for another shutdown of the plant and this time, more than 3,000 black workers participated in the strike, keeping it closed for over two days. These strikes garnered extensive media coverage of the grievances of black workers. DRUM started a newsletter, Drum, and organized other rallies and strikes. Their success inspired the formation of other Revolutionary Union Movements in other Michigan auto plants, such as FRUM (Ford), CADRUM (GM’s Cadillac plant), and GRUM (the larger GM caucus). It also spread to auto plants in other states, as well as other industries, such as healthcare (HRUM), steel, and shipping, with UPS workers forming UPRUM.

In 1969, seven activists organized the various RUMs into an umbrella organization, the League of Revolutionary Black Workers (LRBW). The LRBW had a socialist philosophical underpinning, and its goal was the removal of the roots of oppression in American society. The LRBW sought to transform the UAW from within, arguing that it should be the sole negotiator for black autoworkers, and it called for blacks to be hired into leadership positions at GM and at the UAW. The UAW eventually hired blacks with moderate positions into leadership positions.

The LRBW was very active and had sizable influence for two years but abruptly disbanded in 1971, largely due to the League’s inability to agree on a long-term strategy. DRUM and the LRBW left behind a legacy of increased political awareness of black workers, especially in Michigan, and they also increased the number of black leaders at GM and the UAW.