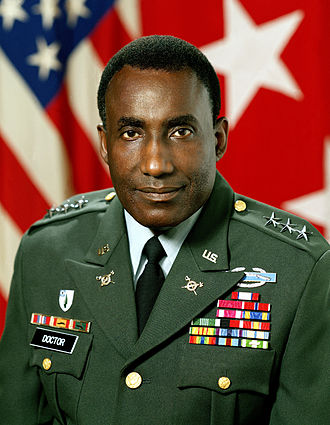 Lieutenant General Henry Doctor, Jr. was a three-star general who achieved the highest rank among the 13 General Officers who have been commissioned through South Carolina State University’s Bulldog Battalion. South Carolina State’s ROTC program has been a leading producer of officers for the United States Armed Forces, with over 2,000 recruits being commissioned as second lieutenants since the program’s founding in 1947.

Henry Doctor Jr. was born on August 23, 1932 to Henry Doctor and Annie Aikens Doctor in Oakley, South Carolina and attended racially segregated Berkeley Training High School in nearby Mocks Corner. Doctor then attended South Carolina State University and graduated with a Bachelor of Science degree in Agriculture in 1954. That same year he was commissioned as a second lieutenant to the U.S. Army through the school’s ROTC program, beginning his 35-year career in the military. During his service he obtained his Master of Arts degree from Georgia State University in counseling and psychological services and was later awarded an honorary doctorate by the Citadel and South Carolina State University.

In the early part of his career, Doctor was stationed both in the United States and abroad in France, South Vietnam, and South Korea; he rose through the Army ranks to eventually become a Lieutenant General in 1977. Despite the tense racial climate of the 1950s when he began his career, Doctor would hold numerous prestigious positions, most notably serving as the Inspector General for the U.S. Army from 1985 to 1989.

Doctor retired from military service in 1989, but he continued his support for the Army. He helped to establish the Military Magnet Academy in Charleston, working with its students and he continued to mentor new members of the South Carolina State ROTC program. He received numerous honors throughout his career for his outstanding courage and leadership including the Legion of Merit, the Bronze Star Medal, and the Distinguished Service Medal Award.

Despite spending much time abroad and working in Washington, D.C., he always remained connected to his southern roots and made frequent visits to South Carolina. On December 7th, 2007 Henry Doctor Jr. died at the age of 75 in Centreville, Virginia due to kidney failure. He was buried at Arlington National Cemetery with full honors. Upon his death, Doctor left behind a large family. He was survived by his wife Janie M. Doctor, with whom he had three daughters and a son, Kenneth Doctor, who died before his father. Doctor also had at the time of his death five grand-children, one great-grandchild, and three living siblings.