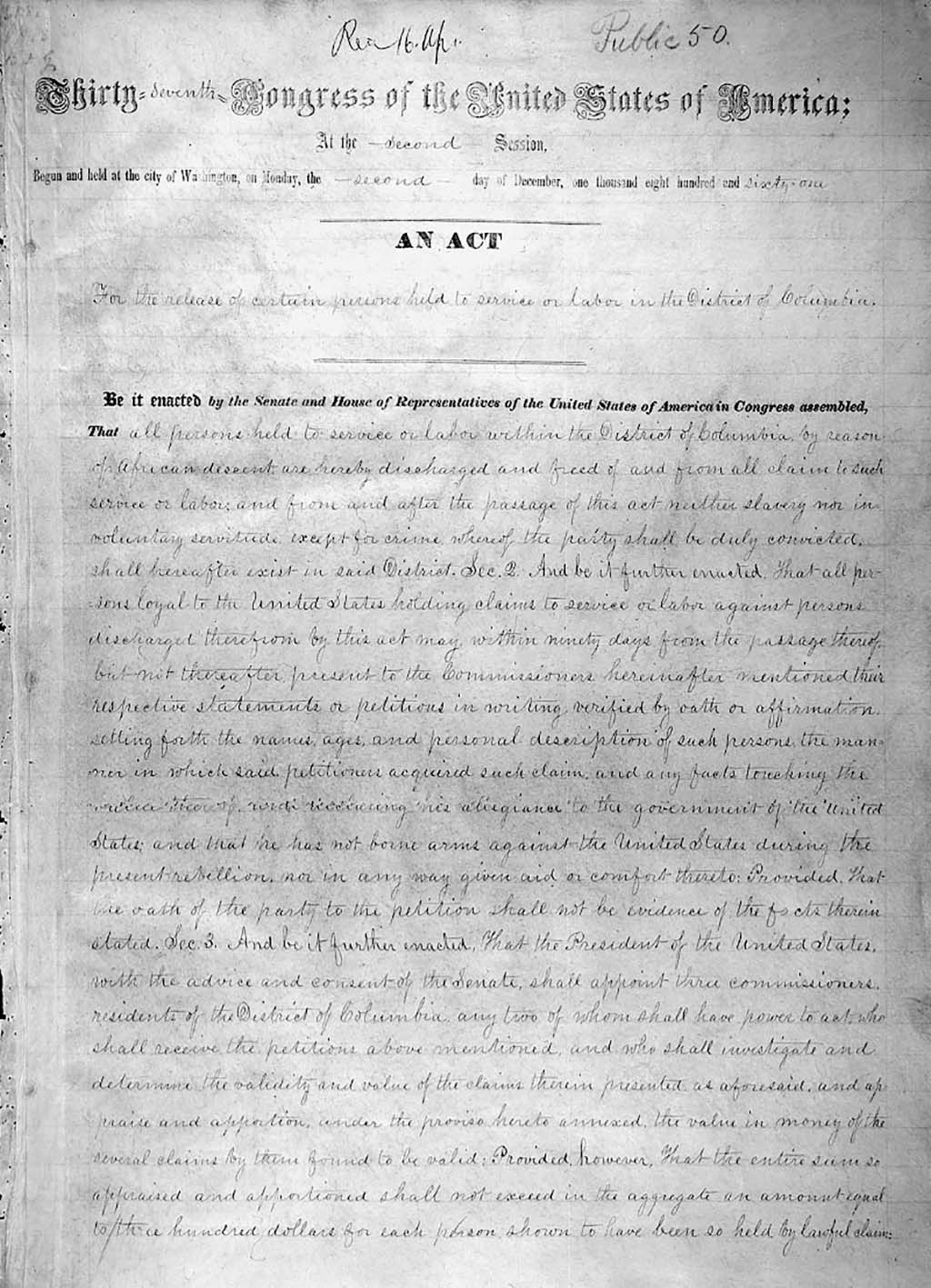 CHAP. LIV. — An Act for the Release of certain Persons held to Service or Labor in the District of Columbia.

Be it enacted by the Senate and House of Representatives of the United States of America in Congress assembled, That all persons held to service or labor within the District of Columbia by reason of African descent are hereby discharged and freed of and from all claim to such service or labor; and from and after the passage of this act neither slavery nor involuntary servitude, except for crime, whereof the party shall be duly convicted, shall hereafter exist in said District.

SEC. 2. And be it further enacted, That all persons loyal to the United States, holding claims to service or labor against persons discharged there from by this act, may, within ninety days from the passage thereof, but not thereafter, present to the commissioners hereinafter mentioned their respective statements or petitions in writing, verified by oath or affirmation, setting forth the names, ages, and personal description of such persons, the manner in which said petitioners acquired such claim, and any facts touching the value thereof, and declaring his allegiance to the Government of the United States, and that he has not borne arms against the United States during the present rebellion, nor in any way given aid or comfort thereto: Provided, That the oath of the party to the petition shall not be evidence of the facts therein stated.

SEC. 3. And be it further enacted, That the President of the United States, with the advice and consent of the Senate, shall appoint three commissioners, residents of the District of Columbia, any two of whom shall have power to act, who shall receive the petitions above mentioned, and who shall investigate and determine the validity and value of the claims therein presented, as aforesaid, and appraise and apportion, under the proviso hereto annexed, the value in money of the several claims by them found to be valid: Provided, however, That the entire sum so appraised and apportioned shall not exceed in the aggregate an amount equal to three hundred dollars for each person shown to have been so held by lawful claim: And provided, further, That no claim shall be allowed for any slave or slaves brought into said District after the passage of this act, nor for any slave claimed by any person who has borne arms against the Government of the United States in the present rebellion, or in any way given aid or comfort thereto, or which originates in or by virtue of any transfer heretofore made, or which shall hereafter be made by any person who has in any manner aided or sustained the rebellion against the Government of the United States.

SEC. 4. And be it further enacted, That said commissioners shall, within nine months from the passage of this act, make a full and final report of their proceedings, findings, and appraisement, and shall deliver the same to the Secretary of the Treasury, which report shall be deemed and taken to be conclusive in all respects, except as hereinafter provided ; and the Secretary of the Treasury shall, with like exception, cause the amounts so apportioned to said claims to be paid from the Treasury of the United States to the parties found by said report to be entitled thereto as aforesaid, and the same shall be received in full and complete compensation: Provided, That in cases where petitions may be filed presenting conflicting claims, or setting up liens, said commissioners shall so specify in said report, and payment shall not be made according to the award of said commissioners until a period of sixty days shall have elapsed, during which time any petitioner claiming an interest in the particular amount may file a bill in equity in the Circuit Court of the District of Columbia, making all other claimants defendants thereto, setting forth the proceedings in such case before said commissioners and their action therein, and praying that the party to whom payment has been awarded may be en-joined from receiving the same ; and if said court shall grant such pro-visional order, a copy thereof may, on motion of said complainant, be served upon the Secretary of the Treasury, who shall thereupon cause the said amount of money to be paid into said court, subject to its orders and final decree, which payment shall be in full and complete compensation, as in other cases.

SEC. 5. And be it further enacted, That said commissioners shall hold their sessions in the city of Washington, at such place and times as the President of the United States may direct, of which they shall give due and public notice. They shall have power to subpoena and compel the attendance of witnesses, and to receive testimony and enforce its production, as in civil cases before courts of justice, without the exclusion of any witness on account of color; and they may summon before them the persons making claim to service or labor, and examine them under oath; and they may also, for purposes of identification and appraisement, call before them the persons so claimed. Said commissioners shall appoint a clerk, who shall keep files and [a] complete record of all proceedings be-fore them, who shall have power to administer oaths and affirmations in said proceedings, and who shall issue all lawful process by them ordered. The Marshal of the District of Columbia shall personally, or by deputy, attend upon the sessions of said commissioners, and shall execute the process issued by said clerk.

SEC. 6. And be it further enacted, That said commissioners shall receive in compensation for their services the sum of two thousand dollars each, to be paid upon the filing of their report; that said clerk shall receive for his services the sum of two hundred dollars per month; that said marshal shall receive such fees as are allowed by law for similar services performed by him in the Circuit Court of the District of Columbia; that the Secretary of the Treasury shall cause all other reasonable expenses of said commission to be audited and allowed, and that said compensation, fees, and expenses shall be paid from the Treasury of the United States.

SEC. 7. And be it further enacted, That for the purpose of carrying this act into effect there is hereby appropriated, out of any money in the Treasury not otherwise appropriated, a sum not exceeding one million of dollars.

SEC. 9. And be it further enacted, that within twenty days, or within such further time as the commissioners herein provided for shall limit, after the passage of this act, a statement in writing or schedule shall be filed with the clerk of the Circuit Court for the District of Columbia, by the several owners or claimants to the services of the persons made free or manumitted by this act, setting forth the names, ages, sex, and particular description of such persons, severally; and the said clerk shall receive and record, in a book by him to be provided and kept for that purpose, the said statements or schedules on receiving fifty cents each therefore, and no claim shall be allowed to any claimant or owner who shall neglect this requirement.

SEC. 10. And be it further enacted, That the said clerk and his successors in office shall, from time to time, on demand, and on receiving twenty-five cents therefor, prepare, sign, and deliver to each person made free or manumitted by this act, a certificate under the seal of said court, setting out the name, age, and description of such person, and stating that such person was duly manumitted and set free by this act.

SEC. 11. And be it further enacted, That the sum of one hundred thousand dollars, out of any money in the Treasury not otherwise appropriated, is hereby appropriated, to be expended under the direction of the President of the United States, to aid in the colonization and settlement of such free persons of African descent now residing in said District, including those to be liberated by this act, as may desire to emigrate to the Republics of Hayti or Liberia, or such other country beyond the limits of the United States as the President may determine: Provided, The expenditure for this purpose shall not exceed one hundred dollars for each emigrant.

SEC. 12. And be it further enacted, That all acts of Congress and all laws of the State of Maryland in force in said District, and all ordinances of the cities of Washington and Georgetown, inconsistent with the pro-visions of this act, are hereby repealed.

BlackPast, B. (2013, December 13) (1862) The District of Columbia Emancipation Act. Retrieved from https://www.blackpast.org/african-american-history/district-columbia-emancipation-act-1862/