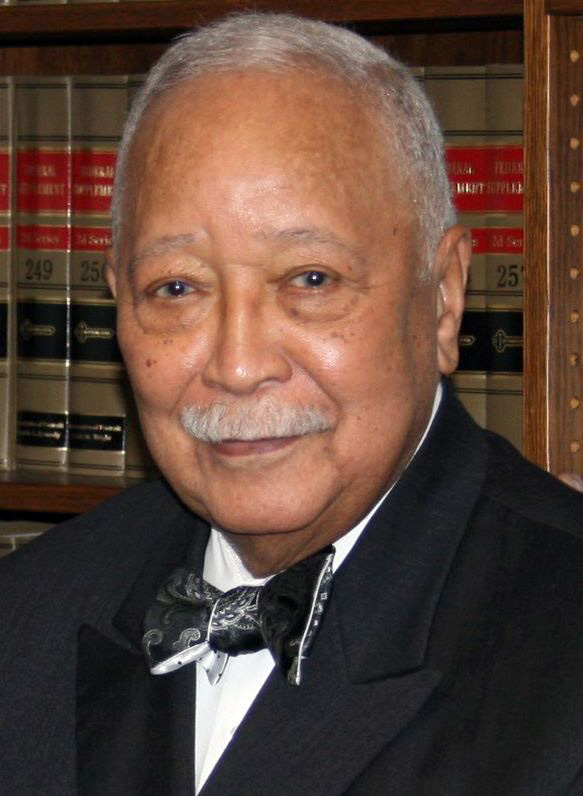 David N. Dinkins is best known as the first and, so far, only black mayor of New York City.  In November 1989, he defeated his challenger, former federal prosecutor Rudolph (Rudy) Giuliani, to become the first African American mayor of New York City.  Giuliani. in a 1993 rematch, defeated Dinkins, thus limiting him to one four-year term in office.

David Norman Dinkins was born in Trenton, New Jersey in 1927. After graduating from high school, he enlisted in the Marine Corps at eighteen and served in 1945 and 1946, after the end of World War II.  After the war, he attended Howard University, graduating with a B.A. in mathematics in 1950.  Dinkins moved to New York City and received a law degree from the Brooklyn Law School in 1956.  Dinkins was a member of Sigma Pi Phi and Alpha Phi Alpha Fraternities

David Dinkins’s political career began when he joined the Carver Club headed by a charismatic politician, J. Raymond Jones, who was known as the Harlem Fox. Dinkins befriended three up-and-coming black New York politicians, Charles Rangel, Basil Paterson, Sr., and Percy Sutton.  In 1965, Dinkins won his first electoral office, a seat in the New York State Assembly. Shortly afterwards Dinkins was offered the position of deputy mayor of New York by Mayor Abraham Beam.  Dinkins was unable to accept the post after it was revealed that he had not paid income taxes for the previous four years.

Dinkins did manage to secure the position of city clerk for New York, which he held from 1975 to 1985. On his third run for the office, Dinkins was elected Manhattan’s borough president in 1985.  In 1989, Dinkins decided to run for mayor of New York.  He surprised political observers by defeating three-time incumbent, Mayor Ed Koch, in the Democratic primaries.  Despite facing a strong Republican challenger in former federal prosecutor Rudolph Giuliani, Dinkins narrowly won the mayor’s race.

Dinkins presided over a city well known for its municipal crises.  His term, however, was particularly turbulent because an unprecedented crack epidemic and the resulting drug wars that swept through the city.  Especially affected were the impoverished African American and Puerto Rican neighborhoods that formed the core of Dinkins’s constituency. The crack epidemic also spawned a crime wave that exacerbated racial tensions.

Two episodes particularly tested the mayor’s ability to be an effective municipal leader. In 1989, shortly after Dinkins took office, a young white woman was allegedly raped and brutalized by marauding black youth in Central Park.  Months later, a black teenager was murdered when he ventured into a white ethnic Brooklyn neighborhood. In both episodes, Dinkins calmed racial tensions and earned an image as a peacemaker.  Although Dinkins presided over a decrease in crime in the city, balanced the city budget by turning a $1.8 billion dollar deficit into a $200 million surplus, and maintained racial peace after the Rodney King verdict sparked rioting in a number of cities across the nation, he never completely shed his image as an ineffective political leader.  The 1993 election proved a political rematch of 1989.  This time, however, Rudolph Giuliani narrowly defeated David Dinkins for the mayor’s position.

Former Mayor Dinkins accepted a professorship at Columbia University’s Center for Urban Research and Policy in 1994.  Although he had endorsed various political candidates and clashed with fellow New Yorker and presidential aspirant Al Sharpton, Dinkins sought no further elective office.