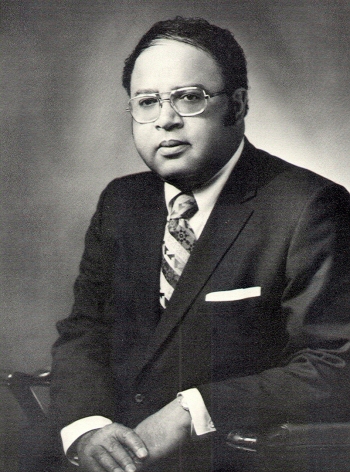 Charles Diggs was born in Detroit, Michigan in 1922. His father was Charles Coles Diggs and his mother was Mayme Jones Diggs.  Young Diggs had an upper middle class background; his father, a prominent mortician and real estate developer, served in the Michigan State Senate.  Diggs eventually took over the family business and followed his father into politics.

As a high school student, Diggs was a star debater. He attended the University of Michigan and then Fisk University in Nashville, Tennessee. In 1943 he was drafted into the Army Air Corps and stationed to Tuskegee Airfield. The war ended without Diggs ever seeing combat.  He returned to Detroit and graduated from Wayne State University in 1946.  In 1950 Diggs was elected to the Michigan State Senate.   Four years later he became Michigan’s first black Congressman when in 1954 he was elected to represent Michigan’s Thirteenth Congressional District, then a predominately white area.  He would represent the district for the next 26 years.
As a member of Congress in the 1950s, Diggs worked to promote the civil rights movement emerging across the nation.  He was the only Congressman to attend the Mississippi trial of the men accused of murdering Emmett Till.  He was especially interested in voting rights and fought to lower the voting age to 18.  He also sponsored legislation to promote black voting rights in the South.  While in Congress, Diggs chaired the House Subcommittee on Africa and the District of Columbia Committee.

Diggs devoted much of his legislative energy to crafting measures to fight unemployment and poverty.  He supported War on Poverty legislation as well as other measures to reduce joblessness among African Americans both in his state and across the nation.

In 1969 Diggs became a founding member and the first chairman of the Congressional Black Caucus.  He used that position to criticize the policies of the Richard Nixon and Gerald Ford Presidential Administrations which seemed, in his view, to encourage continued poverty and racial discrimination. His criticisms of the Nixon White House landed him on the Nixon “Enemies List” of political opponents.

Diggs’s own career, however, ended in scandal. In 1978 he was convicted of mail fraud and of filing false payroll forms. While waiting to be sentenced he won another election. This was to be short lived as he was censured by Congress in 1979 and eventually resigned in 1980. Diggs served 14 months in jail.  Upon his release he retired permanently from politics.  Charles Diggs, Jr. died of a stroke in a Washington, D.C. hospital in 1998.