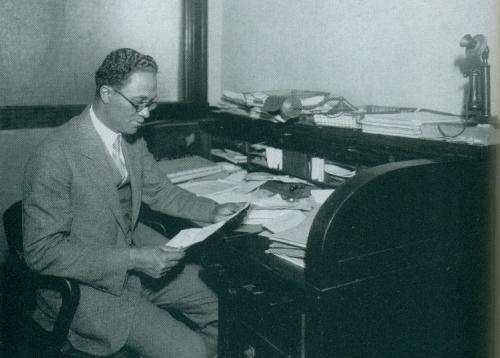 Earl Burrus Dickerson was a member of President Roosevelt’s Fair Employment Practices Commission between 1941 and 1943 and a prominent civil rights attorney in Chicago.  He was also one of the founders of the Supreme Liberty Life Insurance Company with headquarters in Chicago, Illinois.

Dickerson was born in Canton, Mississippi in 1891.  He attended the University of Illinois and served during World War I as an infantry lieutenant with the American Expeditionary Forces. In 1920 he became the first African American to receive a J.D. from the University of Chicago Law School.  The following year Dickerson helped found Supreme Liberty Life Insurance Company and became its general counsel.  By the early 1940s Supreme Life, as it was then known, was the largest African American owned business in the North.  Part of its success stemmed from the still segregated American society.  White insurance companies generally refused to insure African Americans or employ them.  Supreme Life filled that void.  The company was particularly helpful to African Americans in the Great Depression when it provided mortgage loans to struggling families.  Dickerson became the Chief Executive Officer (CEO) of Supreme Life in 1955 and remained in that position until 1971 when he became chairman of the Board of Directors.

In 1947 Dickerson was elected President of the National Bar Association, an organization that included most of the approximately 1,500 black lawyers then practicing in the United States.  Dickerson was one of the most successful attorneys in the U.S. during a time when African American lawyers were still barred from law libraries in most Southern states.

Dickerson’s most famous case became a legendary civil rights victory, Hansberry v. Lee, et al., which was argued before the U.S. Supreme Court in 1940.  In 1937 black businessman Carl Hansberry moved into a previously all-white neighborhood on Chicago’s South Side.  When one neighborhood resident, Anna Lee, filed a lawsuit in 1937 against Hansberry for violating the existing restrictive covenant, he retained Dickerson as his attorney.  Lee’s lawsuit set in motion a civil rights case that ultimately reached the Supreme Court in 1940.  The majority of the Justices sided with Dickerson’s client, Hansberry, ruling that white homeowners have no constitutional right to bar African Americans from segregated neighborhoods.  The Hansberry ruling was, to that point, the most significant challenge of restrictive covenants and opened up previously segregated housing to African Americans in Chicago and across the nation.

Dickerson also worked as an attorney for the City of Chicago between 1923 and 1927.  In 1933 he became the first African American appointed as Illinois Assistant Attorney General.  He held the post until 1939.  Dickerson then served as a member of the Chicago City Council between 1939 and 1943.  He also helped found the African American Chapter of the American Legion in Chicago and was a member of Kappa Alpha Psi Fraternity.