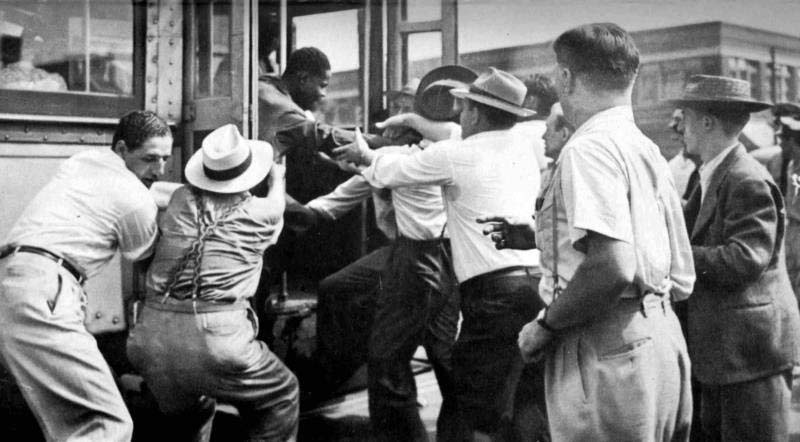 Pulling a man off a streetcar, Detroit Riot, 1943
Fair use image

The Detroit Riot of 1943 lasted only about 24 hours from 10:30 on June 20 to 11:00 p.m. on June 21; nonetheless it was considered one of the worst riots during the World War II era.  Several contributing factors revolved around police brutality, and the sudden influx of black migrants from the south into the city, lured by the promise of jobs in defense plants.  The migrants faced an acute housing shortage which many thought would be reduced by the construction of public housing.  However the construction of public housing for blacks in predominately white neighborhoods often created racial tension.

The Sojourner Truth Homes Riot in 1942, for example, began when whites were enraged by the opening of that project in their neighborhood.  Mobs attempted to keep the black residents from moving into their new homes.  That confrontation laid the foundation for the much larger riot one year later.

On June 20, a warm Saturday evening, a fist fight broke out between a black man and a white man at the sprawling Belle Isle Amusement Park in the Detroit River.  The brawl eventually grew into a confrontation between groups of blacks and whites, and then spilled into the city.  Stores were looted, and buildings were burned in the riot, most of which were located in a black neighborhood.  The riot took place in an area of roughly two miles in and around Paradise Valley, one of the oldest and poorest neighborhoods in Detroit, Michigan.

As the violence escalated, both blacks and whites engaged in violence.  Blacks dragged whites out of cars and looted white-owned stores in Paradise Valley while whites overturned and burned black-owned vehicles and attacked African Americans on streetcars along Woodward Avenue and other major streets.  The Detroit police did little in the rioting, often siding with the white rioters in the violence.

The violence ended only after President Franklin Roosevelt, at the request of Detroit Mayor Edward Jeffries, Jr., ordered 6,000 federal troops into the city.  Twenty-five blacks and nine whites were killed in the violence.  Of the 25 African Americans who died, 17 were killed by the police.  The police claimed that these shootings were justified since the victims were engaged in looting stores on Hastings Street.  Of the nine whites who died, none were killed by the police.  The city suffered an estimated $2 million in property damages.