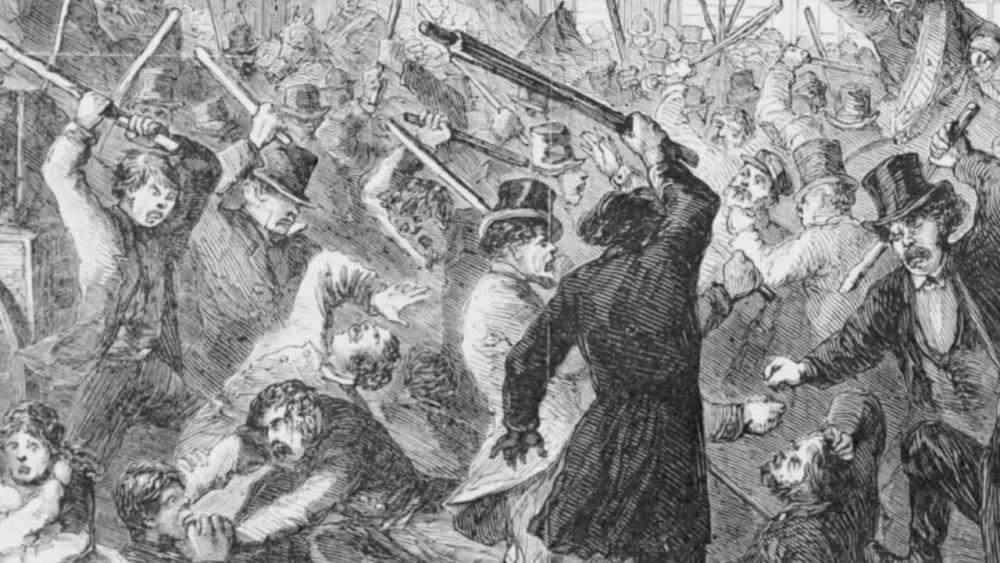 On March 6, 1863, a white mob attacked Detroit, Michigan’s black population in the city’s first race riot. The event demonstrated racism among whites in the North and the tension between races, which would lead to the deadly New York City, New York Draft Riots in July 1863.

As in other Northern cities, many whites resented the government’s military draft and the blacks, largely from the South, who had arrived in town. The local Democratic newspaper, the Detroit Free Press, frequently ran articles accusing African Americans of causing various problems that mainly affected the city’s working-class whites. The newspaper promoted the idea that freedmen leaving the South would take jobs from white men which in turn contributed to heightened racial tension in the city.

Tensions in Detroit finally boiled over during the trial of William Faulkner, a mixed-race man accused of molesting two girls, one of whom was white. Even though Faulkner identified as a “Spanish-Indian” and had previously voted (at the time, only white men could vote), the Free Press and other newspapers labeled him a black man. As far as the white public was concerned, Faulkner was black and had raped a white girl.

When Faulkner was escorted after the courtroom after the first day of his trial, a large crowd of whites harassed him and threw stones. The next day, March 6, an even larger mob assembled outside the courthouse. Faulkner was convicted and sentenced to life in prison, but the agitated crowd still attacked him as he was transported back to jail. The Detroit Provost Guard, charged with his protection, fired blanks in an attempt to disperse the crowd. When the mob remained, they fired live ammunition, killing a white bystander named Charles Langer.

Infuriated, the mob set out to attack the city’s predominantly black neighborhood. They moved in on a cooper shop, but were fought off by five men working inside, one of whom had a shotgun. Instead, the mob set fire to the shop and an attached home. Although all of the occupants escaped the building, they were immediately attacked by the white mob, and one man, Joshua Boyd, died of his injuries.

In total, the mob burned at least thirty buildings, caused thousands of dollars in damages, and injured many African Americans in the streets. By the time that local troops suppressed the riots, at least 200 black residents were newly homeless, with some fleeing across the river to Canada.

No one was ever held criminally responsible for the deaths of Langer or Boyd. Several years after the riots, Faulkner’s accusers recanted their story and he was released from prison. Although the Michigan Legislature recommended compensating residents for property damage from the riots, the city council refused to do so.

Matthew Kundinger, Racial Rhetoric: The Detroit Free Press and Its Part in the Detroit Race Riot of 1863, (Ann Arbor: University of Michigan Press, 2006),  https://michiganjournalhistory.files.wordpress.com/2014/02/kundinger.pdf; “A Thrilling Narrative from the Lips of the Sufferers of the Late Detroit Riot, March 6, 1863” http://docsouth.unc.edu/neh/detroit/detroit.html.