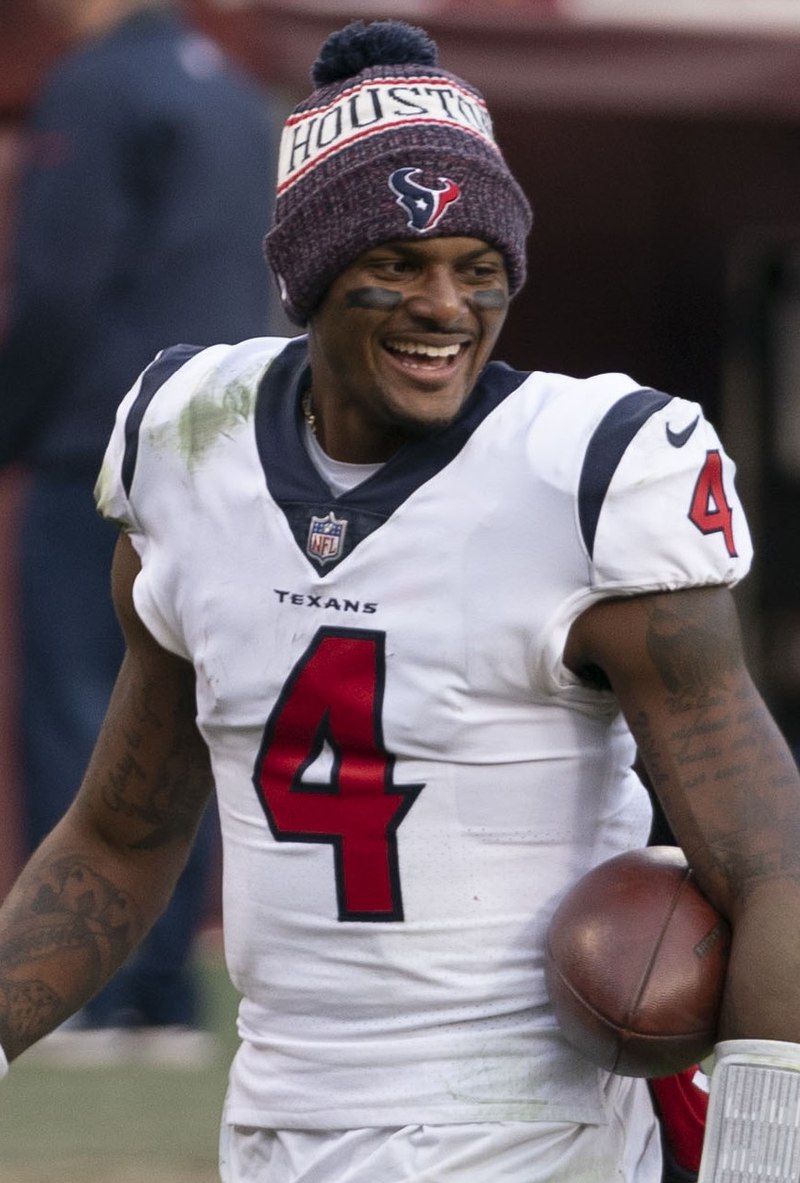 Derrick Deshaun Watson is a professional football quarterback for the Houston (Texas) Texans of the National Football League (NFL). He played college football at Clemson University for the Clemson Tigers until his junior year where he entered the 2017 NFL Draft where he was selected in the first round, 12th overall by the Houston Texans. During his time playing in the NFL, Watson has become a pro bowler and won the Pro Football Writers Association (PFWA) Award.

Watson was born on September 14, 1995 to Deann Watson and Don Richardson in Gainesville, Georgia. He attended Gainesville High School in Gainesville, Georgia where he played for the high school football team. During the time he played for the team he set school records including total yards (17,134) and total touchdowns (218). Watson help led his team to a state championship during his junior year. Watson graduated from Gainesville High School in 2014 and chose to attend and play college football at Clemson University for the Clemson Tigers.

During his freshman year, Watson was named starting quarterback for the team where in his first game for the Clemson Tigers he threw six touchdown passes and 435 yards in a win over the North Carolina Tar Heels. The rest of the season Watson suffered numerous injuries including a broken right hand, LCL sprain, and torn ACL. During his sophomore year, Watson led the Clemson Tigers to an undefeated regular season with a 12-0 record. Watson also led the Clemson Tigers to the Atlantic Coast Conference (ACC) Championship game against the North Carolina Tar Heels. After the game he was named the 2015 Orange Bowl Offensive MVP. Watson led the Clemson Tigers to the 2016 College Football Playoff National Championship where they lost to the University of Alabama Crimson Tide team. Despite the loss, Watson was named a Heisman Trophy finalist but finished third place behind Christian McCaffrey and Derrick Henry who was the eventual Heisman Trophy winner that year. Watson also won the Davey O. Brien Award and ACC offensive Player of the Year.

During his junior year, Watson would lead the Clemson Tigers to the Fiesta bowl with a victory over Ohio State where he received the Offensive MVP Award. Watson and the Clemson Tigers would go on to defeat Alabama in the 2017 College Football Playoff National Championship game. Watson would also win the Johnny Unitas Golden Arm Award and Archie Manning Award that year. Watson was also a candidate for the Heisman Trophy Award but again came up short against the eventual Heisman Trophy winner Lamar Jackson who played for the University of Louisville.

Watson would forgo his senior season and enter the 2017 NFL Draft. In that draft he was selected in the first round by the Houston Texans. During his NFL career, he was named to two Pro Bowls and led the Texans to two playoff appearances. Watson continues to be an active NFL player in 2020. Derrick DeShaun Watson is currently single and has no children.