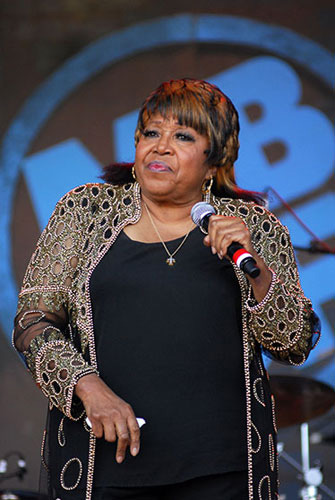 The legendary vocalist, lyricist Denise LaSalle was born Ora Denise Allen on July 16, 1939, on a plantation in Sidon, Leflore County, Mississippi. Her parents were Nathaniel A. Allen Sr. and Nancy Cooper. In 1947, when LaSalle was seven and the youngest of eight children, her entire family moved to Belzoni, Mississippi. At the age of 13, LaSalle was a principal singer with an all-female gospel ensemble, the Sacred Five.

At 22 in 1962, LaSalle left Mississippi to join her oldest brother in Chicago. There she continued to sing with the Sacred Five and also signed a contract with Chess Records. When the company failed to produce a record for her for nearly five years, she left in 1967 and signed with Tarpon Records where she released “A Love Reputation.” The song was a regional hit.  LaSalle, who had dropped out of high school earlier, completed her General Educational Development (GED) requirements the same year.

In 1969 LaSalle married Bill Jones, another recording artist singed with the Crajon Records label. Two years later in 1971, her single, “Trapped by a Thing Called Love” was released by Westbound Records. It peaked #13 on the Billboard Hot 100 and #1 on the Billboard R&B chart with a million in sales and LaSalle received the Recording Industry Association of America (RIAA) gold disc. The following year, the single, “Now Run And Tell That,” peaked at #46. LaSalle divorced Jones in 1974.

In 1976, LaSalle married James Wolfe, Jr., a disc jockey and moved from Chicago to Jackson, Tennessee. The couple eventually had three children, Ray, Dawn, and Bridgette. She also signed with ABC Records and in 1977 released “Love Me Right” which peaked at #10 on the R&B Chart and reached #80 on the Pop Chart.

In 1980, LaSalle signed with Malaco Records as a lyricist and composer. She wrote for Arzell “ZZ” Hill, a gospel and blues singer from Texas. After this successful project, LaSalle began recording with Malaco, eventually producing ten records including “Lady in the Street” (1983), “Right Place, Right Time” (1984), and “My Tu-Tu” (1985). In 1986, LaSalle founded the National Association for the Preservation of the Blues to lobby for the genre of soul and blues to remain connected to the artists and give them a larger excellent voice in the industry. “Hittin’ Where It Hurts,” released in 1989, rose to #61 on Top R&B Albums.  In 1998, LaSalle was nominated for the W. C. Handy Soul/Blues Female Artist of the Year. Also, in 2015, she was indicted into the Rhythm and Blues Music Hall of Fame.

Denise LaSalle, “Queen of the Blues,” died on January 8, 2018, in Nashville, Tennessee, of complications after a leg amputation. She was 78.