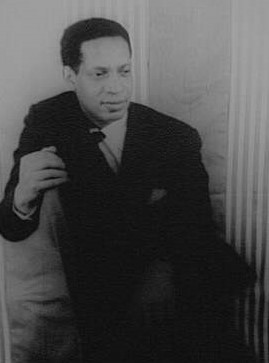 The novelist William Edward Demby Jr. was born in Pittsburgh, Pennsylvania, on Christmas day, 1922, to William and Gertrude Demby.  He was raised in their family of seven children in the Fairywood district of Pittsburgh’s West Side. The family moved to Clarksburg, West Virginia, shortly after Demby’s graduation from Langley High School.

Demby was drafted into the Army in 1942, while a student at West Virginia State College, where he studied creative writing with poet and writer Margaret Walker.  He served in the 92nd Infantry Division, a segregated unit in Italy and North Africa during World War II, and wrote for the Army’s newspaper, Stars and Stripes. Following the war, he attended Fisk University under the GI Bill, where he was mentored by poet Robert Hayden and Fisk’s librarian, Arna Bontemps. Demby graduated in 1947.

Demby spent twenty years in Rome, from 1947 to 1967, working as a journalist, screenwriter and English translator of scripts for major directors of the Italian cinema, including Roberto Rossellini, Federico Fellini, Luchino Visconti, and Michelangelo Antonioni.  In 1953 Demby married Italian poet, translator, and screenwriter, Lucia “Tatina” Drudi, and in 1955 their son James, now a classical music composer and conductor, was born.

Demby’s first novel, Beetlecreek (1950), was set in an imaginary West Virginia town similar to those he knew from his early life. His second novel, The Catacombs, which included actual newspaper headlines and clippings, appeared in 1965. Demby moved to New York in 1967, where he taught English at the College of Staten Island for the next twenty years.

He continued to visit Italy frequently, however, from his home in Sag Harbor, New York, caring for his wife, whose health was failing.  While in Italy the couple lived in a nineteenth century villa in the Tuscany woods, near Florence, which his wife had inherited from an aunt.

Demby’s third novel, the semi-autobiographical Love Story Black (1978) was followed by Blue Boy (1980), a novel that has inexplicably disappeared. Demby began writing his fifth and last novel, King Comus, in the mid-1980s, which he would not pronounce finished until 2007.  One year earlier, in 2006, he received a Lifetime Achievement Award from the Anisfield-Wolf Book Award organization.

Upon his retirement from teaching in 1989, Demby continued work on King Comus, which may well prove to be the last novel written by an African American who served in World War II.  Demby completed it while living at the Tuscan villa after the death of his wife in 1995.  King Comus was published posthumously, by Ishmael Reed Publishing Company, in 2017.

In 2004, Demby married Barbara Morris, a former NAACP lawyer, whom he had met and dated while they were Fisk University students. They spent his final years in Sag Harbor, until Demby’s death on May 23, 2013 at ninety years of age.