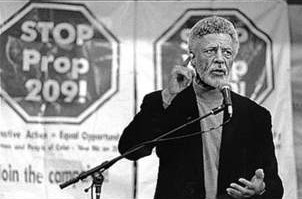 Ronald Vernie Dellums was born on November 24, 1935, in Oakland, Californiato Willa Terry Dellums and Vernie Dellums. His father, Vernie Dellums, was a longshoreman, and his mother was a labor organizer.  As a child, he attended St. Patrick Catholic School in Oakland.

After high school, Dellums served in the United States Marine Corps from 1954 to 1956 after he was denied a college scholarship. After service in the Marines, Dellums, with the help of the G.I Bill and an outside job, attended San Francisco State College, where he received a Bachelor of Arts degree in 1960.  This was followed by an M.A. in Social Welfare from the University of California at Berkeley in 1962.

In the same year, Dellums began his career as a psychiatric social worker in the California Department of Mental Hygiene in Berkeley.  Dellums also taught at San Francisco State University and the University of California, Berkeley.  His work soon led him to become involved in community politics.  In 1967, Dellums was elected to the Berkeley City Council.  He quickly became known as a spokesperson for African American community affairs and for his radical political beliefs.

After three years on the Berkeley City Council, Dellums decided to run for Congress.  With high name recognition–partly because his uncle, C.L. Dellums, was a well-known East Bay political activist and founding member of the Brotherhood of Sleeping Car Porters–and with crucial campaign assistance from Coretta Scott King, the widow of slain civil rights leader Dr. Martin Luther King, Jr., as well as from Berkeley’s powerful anti-Vietnam War organizations, 35-year-old Dellums was elected to Congress.

Dellums quickly emerged as one of the most radical and outspoken Congressmen in Washington.  Within weeks of his election, Dellums called for Congressional investigations into alleged war crimes in Vietnam and co-founded the Congressional Black Caucus.  Two years later, he began a long campaign to end the apartheid policies of South Africa. In 1986, he introduced the Comprehensive Anti-Apartheid Act which called for sanctions on South Africa.  President Ronald Reagan vetoed the bill, but his veto was overridden.  This marked the first time a presidential veto of a foreign policy measure was overridden by Congress in the 20th Century.

Ronald V. Dellums remained in Congress until his resignation on February 6, 1998.  His resignation prompted a special election which sent Barbara Lee to Congress from his district.  After his resignation, Dellums wrote his autobiography titled Lying Down with the  Lions: A Public Life from the Streets of Oakland to the Halls of Power.  In June 2006, he was elected as the mayor of Oakland, succeeding former California governor, Jerry Brown.  After a controversial term as mayor, including both getting the largest grant in Oakland history and surviving a recall attempt, Dellums declined to run for reelection in 2010.

Ronald Vernie Dellums, a member of Alpha Phi Alpha Fraternity, died at his home in Washington, D.C. on July 30, 2018.  He ws 82 and was survived by his widow, Cynthia Dellums, and their four children.