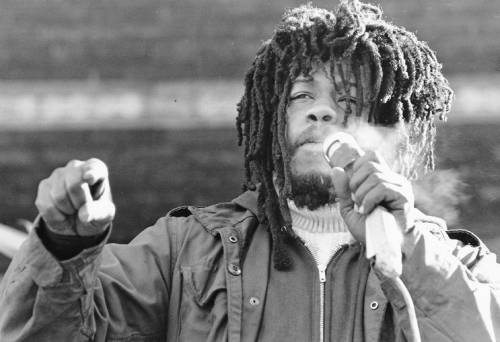 Delbert Samuel Orr Africa, Black Panther, MOVE member, and political prisoner, was born April 2, 1946 in Chicago, Illinois to Herma Estelle Hall and Samuel Orr.  After graduating from Chicago’s Crane Technical High, Orr enlisted into the US Air Force in 1963, and was honorably discharged as an airman E-3 four-years later.  In December 1968, he became a trainman at Chicago & North Western Railroad.

Orr joined the Chicago Black Panther Party (C-BPP) in the early months of 1969, enrolled in their mandatory six-week Marxist and Socialist political education program, and briefly became its Minister of Information.  Police harassment forced him to flee to Canada that Fall with other Panthers. Orr’s underground activities involved bank robberies.  In September he witnessed the lakeside birth of daughter Yvonne Malaika Orr-El, and the following month he was involved in an automobile accident, causing severe injuries.

After the December 4, 1969 police/FBI assassination of C-BPP chairman Fred Hampton and Mark Clark, Orr fled to Philadelphia.  He met John Africa, formally Vincent Lopez Leaphart, and his Community Action Movement (MOVE) in March 1970 and within months he joined, making Africa his last name. Unlike most Black power organizations of the time, MOVE was a naturalist group that embraced environmentalism, sustainability, and anti-capitalism.

Delbert Africa, John Africa, and other MOVE members attended the Revolutionary People’s Constitutional Convention at Temple University (September 1970); met with civil rights advocate Dick Gregory to share MOVE’s sacred texts, The Guidelines of John Africa (April 1972); arrived at the Democratic National Convention in Miami, Florida hoping to spread their message (July 1972); and protested the 1974 Philadelphia appearances of activists Jesse Jackson, Jane Fonda, and Tom Hayden on the premise that they were “tools of the system, who misguided the people with misinformation, offering only the problem and not the solution.”

In May 1973, MOVE purchased a communal Powelton Village home, near Drexel University.  John appointed Delbert Minister of Confrontation and Security after the formerly peaceful organization was driven to armed self-defense in 1977 to counter years of judicial subjugation, state violence, incarcerations, and fines. Tensions escalated in March 1976 when Philadelphia police stomped to death a MOVE infant, Life Africa.

On August 8, 1978 the police evicted MOVE from their house. In the confrontation friendly fire killed Officer James J. Ramp, and unarmed and shirtless Delbert Africa was savagely beaten.  Media outlets nationally beamed the video-recorded brutal assault, which resulted in a cracked cheekbone, broken right-jaw, fractured eye-socket, and multiple lacerations/contusions.  In 1981, despite an unidentified shooter, inconsistencies, and absence of intent, Delbert Africa and eight MOVE members were sentenced to 30-100 years in prison for Ramp’s death.

On May 13, 1985 police bombed MOVE’s Cobbs Creek row home that resulted in the murder of eleven of its members and 250 Philadelphians becoming unhoused.  The deceased included Delesha (Delitia) Melissa Orr Africa, the twelve-year-old daughter of Delbert and Janet Holloway Africa.  As in the 1978 police beating, no officers were criminally prosecuted.

Delbert Africa spent forty-one years in prison before being released in January 2020. He died of prostate and bone cancer six months later on June 15, 2020 at the age of 74.  In April 2021, Princeton and University of Pennsylvania apologized for their unethical use and possession of Delesha and Tree Africa’s remains.