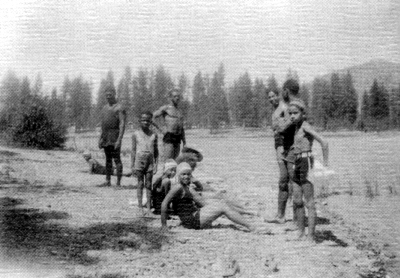 The Spokesman-Review of March 6, 1910 featured this headline: ‘Spokane Negroes Buy Land Tract to be Developed by Black Labor Only.’ The article continued, “For the purpose of giving the Negroes of Spokane an opportunity to demonstrate a fitness to survive in this northwest… a band of colored folks has organized a development company, and bought 140 acres of land near Deer Lake [north of the city].” Initially known as the Deer Lake Project, the company’s objectives were to operate the biggest and best orchard in Stevens County, to be both economical and profitable in their business undertakings, and to help defray expenses by growing truck garden vegetables between the trees. At least 45 stockholders from Spokane to Chicago invested $18,000 in the project.

Peter Barrow, Jr., and his brother Charles Barrow, were president and secretary of the company, respectively. Charles’s daughter, Eleanor Chase, told historian Quintard Taylor, “My Uncle Peter homesteaded land across the lake from this orchard. It used to be [called] Barrow’s Landing, and he built, by himself, three or four cabins. It was a resort for friends and other people who wanted to enjoy the lovely environment.” Even though prospects were bright at first, the company existed only for a few years, and eventually had to curtail operations because of transportation and monetary problems. “Oh, I would say that it might have lasted ten years,” Eleanor Chase remembered. Today Deer Lake is the site of the Deer Lake Resort, still boasting the same lovely environment.