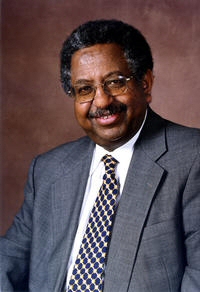 Praised as one of the world’s most distinguished academic physicians, from 1993 to 2003 Dr. Haile Tesfaye Debas served as Dean of the School of Medicine at the University of California at San Francisco. Prior to becoming dean, for six years he was chairman of the Department of Surgery at UCSF.

Renowned as a researcher and credited with nearly 40 scientific papers, Debas was elected president of the International Hepato-Biliary-Pancreatic Association in 1991. He was also a director of the American Board of Surgery, and a fellow of both the American College of Surgeons and the American Academy of Arts and Sciences. At UCSF he revamped the medical school’s curriculum to focus on training medical students and established the Academy of Medical Educators which was renamed in his honor.

In 1997 Debas was interim Chancellor of UCSF and oversaw the merger of its clinical services with those of Stanford University. In 2004 he was the recipient of the Abraham Flexner Award for Distinguished Service to Medical Education, presented by the Association of American Medical Colleges. A forceful advocate of affirmative action to increase the number of minority race physicians, in 1998 he was president of the Society for Black Academic Surgeons. As Dean Emeritus, Debas became executive director of UCSF Global Health Sciences and has been active in the United Nations Commission for HIV/AIDS and Governance in Africa, and the Committee on Science, Engineering and Public Policy of the National Academy of Sciences.