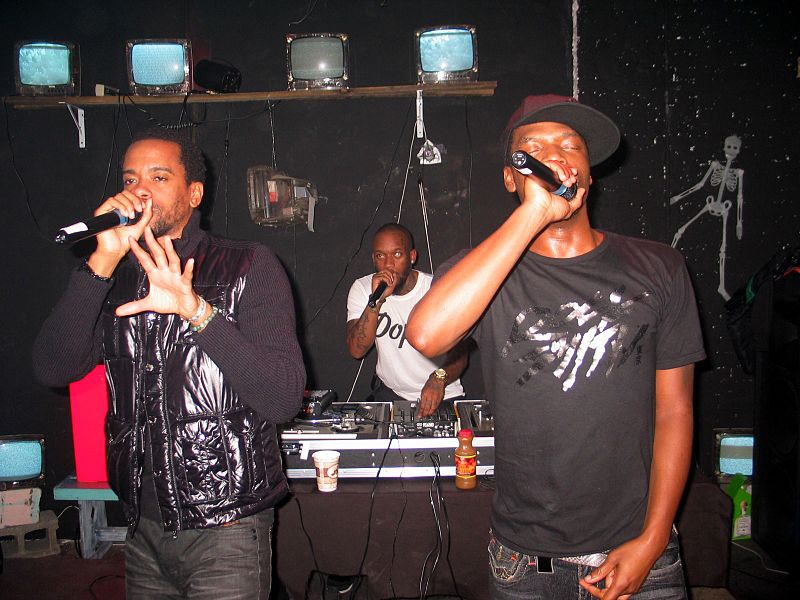 Olugbala would join the Uhuru Movement, a socialist and African internationalist movement founder by Omail Yeshitela. The duo was discovered by Brand Nubian member Lorenzo “Lord Jamar” Dechalus while they were in New York City. Dechalus helped them sign a deal with Loud Records.

In 2002, Dead Prez released a mixtape called Turn Off The Radio: The Mixtape Vol. 1. The mixtape featured the singles “Turn Off the Radio,” and “We Need a Revolution,” The mixtape peaked at 78 on the Billboard Top R&B/Hip Hop albums. A year later, the group released a second mixtape album, Turn Off The Radio: The Mixtape Vol. 2: Get Free or Die Tryin which included the singles “Fuck the Law,” and “When Mamma Cries,” The album charted on the US Billboard 200 Albums chart at no. 144.

In 2004, Dead Prez released their second album, Revolutionary But Gangsta which featured “Hell Yeah (Pimp the System),” The album had modest success but didn’t sell 500,000 copies. In 2009, the group released their third mixtape, Turn Off The Radio: The Mixtape Vol.3: Pulse Of The People. It featured the singles “Stimulus Plan,” “Gangsta Gangsta,” and “Summer Time,” Their fourth mixtape called Turn Off The Radio: The MixtapeVol.4: Revolutionary But Gangsta Grillz appeared in 2010.

In 2012, Dead Prez released their third album, Information Age which again failed to sell 500,000 units. Both Ibomu and Olugbala released solo albums during their careers. Ibomu released Manhood (2007), The Workout (2011), and The Workout II (2020). Olugbala released Confidential (2006). The duo also produced collaborative albums including Can’t Sell Dope Forever (Dead Prez and Outlawz) (2006), Solider 2 Solider (with stic.man and Young Noble) (2006), AP2P All Power To The People (with M-1 and Bonnot) (2011), Evolutionary Minded (Furthering the Legacy of Gil Scott-Heron)(with Kentyah, Brian Jackson, and The New Midnight Band) (2013), and Between Me and the World (M-1 and Bonnot) (2016).

In 2006, the cable movie network, Starz released a documentary on the group called Dead Prez: It’s Bigger Than Hip Hop. Throughout the duo’s career, Dead Prez’s music while not commercially successful, focused on social issues included social justice, self-determination, and Pan-Africanism. The group was also known for their socialism beliefs and their embrace of the vegan healthy eating lifestyle. The group remains active in the music business as of 2021.