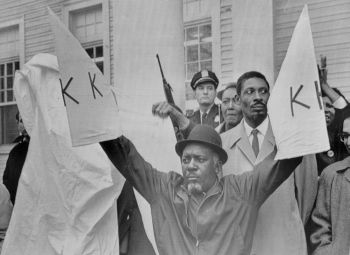 On July 10, 1964, a group of African American men in Jonesboro, Louisiana led by Earnest “Chilly Willy” Thomas and Frederick Douglas Kirkpatrick founded the group known as The Deacons for Defense and Justice to protect members of the Congress of Racial Equality (CORE) against Ku Klux Klan violence.  Most of the “Deacons” were veterans of World War II and the Korean War. The Jonesboro chapter organized its first affiliate chapter in nearby Bogalusa, Louisiana led by Charles Sims, A.Z. Young and Robert Hicks. Eventually they organized a third chapter in Louisiana. The Deacons tense confrontation with the Klan in Bogalusa was crucial in forcing the federal government to intervene on behalf of the local African American community.  The national attention they garnered also persuaded state and national officials to initiate efforts to neutralize the Klan in that area of the Deep South.

The Deacons emerged as one of the first visible self-defense forces in the South and as such represented a new face of the civil rights movement.  Traditional civil rights organizations remained silent on them or repudiated their activities.  They were effective however in providing protection for local African Americans who sought to register to vote and for white and black civil rights workers in the area.  The Deacons, for example, provided security for the 1966 March Against Fear from Memphis to Jackson, Mississippi.  Moreover their presence in Southeastern Louisiana meant that the Klan would no longer be able to intimidate and terrorize local African Americans without challenge.

The strategy and methods that the Deacons employed attracted the attention and concern of the Federal Bureau of Investigation (FBI), which authorized an investigation into the group’s activities. The investigation stalled, however, when more influential black power organizations such as US and the Black Panther Party emerged after the 1965 Watts Riot.  With public attention, and the attention of the FBI focused elsewhere, the Deacons lost most of their notoriety and slowly declined in influence.  By 1968 they were all but extinct.  In 2003 the activities of the Deacons was the subject of a 2003, “Deacons for Defense” documentary.