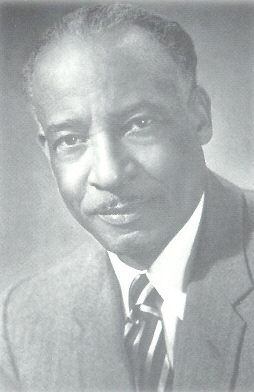 William Levi Dawson was an African American composer, choir director, and professor specializing in black religious folk music. He was born on September 26, 1899, in Anniston, Alabama to Eliza Starkey and George Dawson, the first of their seven children. His father, a former slave, was an illiterate day laborer. In 1912, Dawson ran away from home to study music full-time as a pre-college student at the Tuskegee Institute (now University) under the tutelage of school president Booker T. Washington. Dawson paid his tuition by being a music librarian and manual laborer working in the school’s Agricultural Division. He also participated as a member of Tuskegee’s band and orchestra, composing and traveling extensively with the Tuskegee Singers for five years; he had learned to play most of the instruments by the time he graduated from the high school division in 1921.

Dawson’s next four years (1921-25) were spent earning his B.A. He enrolled in composition and orchestration at Washburn College in Topeka, and theory and counterpoint at the Horner Institute of Fine Arts in Kansas City, where in 1925 he graduated with a bachelor’s degree in music theory and in composition. While still an undergraduate student, he displayed his genius in chamber music compositions and at the same time supporting himself as the director of music at Kansas Vocational College in Topeka, Kansas, and at Lincoln High School in Kansas City, Missouri.

In 1926, Dawson moved to Chicago, Illinois to study composition at the American Conservatory of Music, where he earned his master’s degree in 1927. Dawson also became nationally renowned between 1926 and 1930 as a trombonist with the Redpath Chautauqua and the Chicago Civic Symphony Orchestra; and in 1929-1930 as a local band director, winning prestigious band director contests from the Chicago Daily News (1929), and the Wanamaker Competition for the songs “Jump Back, Honey, Jump Back” and “Scherzo” (1930).

In 1928, tragedy struck as Dawson’s wife Cornella Lampton died within the first year of their marriage. For the next seven years Dawson found refuge in his work until marrying Cecile Demae Nicholson in 1935 in Atlanta, Georgia.

In September 1930, Dawson accepted Tuskegee Institute’s invitation to direct its School of Music, a position that he held until his retirement in 1955. As director, Dawson modernized the department and hired gifted faculty. As a result, Tuskegee’s 100-voice choir became a world-class ensemble best known for its headline-making performances at the grand opening of the Radio City Music Hall in New York in 1932. The choir performed that year at the White House for President Herbert Hoover and at Hyde Park, New York, for future president Franklin D. Roosevelt. In 1946, the choir broke the race barrier at Washington D.C.’s Constitution Hall as they became the first African Americans to perform there. (In 1939, the Daughters of the American Revolution-managed hall had denied singer Marian Anderson the opportunity to sing to an integrated audience.)

Dawson’s compositions included chamber music such as his “Trio for Violin, Cello and Piano,” performed by the Kansas City Symphony. Although known for infusing West African folk music into his compositions, his best orchestral and choral works were based on spirituals like his Negro Folk Symphony (1934), which was performed by the Philadelphia Orchestra at its world premiere. His most popular compositions include “Ezekiel Saw the Wheel,” “Jesus Walked the Lonesome Valley,” “Talk about a Child That Do Love Jesus,” and “King Jesus Is a-Listening,” songs published under his record business, Imprint Music Press. William Levi Dawson died on May 2, 1990, and is buried at Tuskegee University where his legacy continues through the Golden Voices Choir.