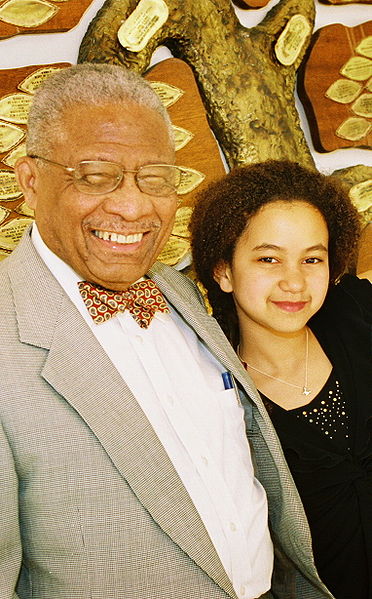 Horace G. Dawson, Jr. was appointed U.S. Ambassador to Botswana by President Jimmy Carter in 1979.  After his confirmation by the U.S. Senate he served in that post until 1983.  Dawson was born in Augusta, Georgia on January 30, 1926.  He attended Lincoln University in Pennsylvania where he earned a B.A. in English in 1949, M.A. in comparative literature in English from Columbia University in 1950, and a Ph.D. in mass communications from the University of Iowa in 1961. Dawson was awarded an honorary Doctorate of Laws degree from Lincoln University in 1991.

Dawson was drafted into the U.S. Army while working on his undergraduate degree. He served two years of duty in both Europe and the Philippines before returning to complete his bachelor’s degree at Lincoln University.

In 1950 Dawson began his professional career teaching English at Southern University in Baton Rouge, Louisiana. In 1951 he secured a position at North Carolina Central University teaching English and serving as the institution’s public relations director, remaining there for the next decade.

In 1962 Edward R. Murrow, then Director of the United States Information Agency (USIA) persuaded Dawson to leave university teaching and join his agency. Dawson did so and was assigned his first overseas post (1964-1967) as USIS (the agency was called the United States Information Service outside the United States) officer at the U.S. Embassy in Kampala, Uganda. He served as the cultural affairs officer where his primary responsibilities included identifying and interpreting major stories in the U.S. press to Ugandan reporters and more generally keeping the Ugandan government and people aware of U.S. interests in maintaining democratic institutions in nations around the world.  Dawson drew upon his academic experience to help promote cultural exchange and cultural understanding in Uganda through two publications, Press Time, USA, and Uganda Calling, that were published at Uganda’s Makerere University. Dawson later served in similar roles at the U.S. Embassies in Lagos, Nigeria and Monrovia, Liberia.

From 1973 to 1977, Dawson was USIA director of all American information and cultural programs in Africa.  He then served in the U.S. Embassy in Manila, the capital of the Philippines, from 1977 to 1979.  In 1979 President Jimmy Carter appointed Dawson the U.S. Ambassador to Botswana.  He served in that post until 1983.  In 1989, after retiring from his work in the State Department, Dawson returned to academia at the age of 63 to become a member of the faculty in the School of Communication at Howard University.

Dawson served as director of the Patricia Robert Harris Public Affairs Program at Howard University.  He was also the founding director of the Ralph J. Bunche International Affairs Center at Howard University in Washington, D.C. He is the former chairman of the Association of Black American Ambassadors and advisor to the Board of Directors of the Ambassador Horace G. Dawson Scholars program, a program dedicated to mentoring young males in the public school system in the nation’s capital. Dawson was a member of Sigma Pi Phi and Alpha Phi Alpha Fraternities.

Howard Dawson was married to Lula Cole Dawson who died on January 14, 2004. He was survived by two children.