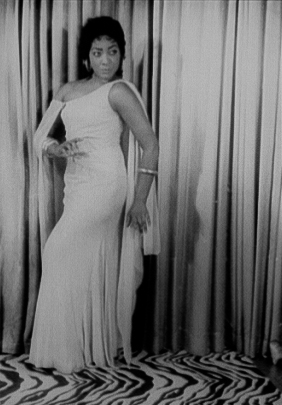 Gloria Davy, a rich-voiced (lirico-spinto) soprano who “sang for the sheer joy of singing” had a four decade career as a concert singer. Early in her career she replaced Leontyne Price as Bess in the 1954 international tour of Porgy and Bess. In 1958 she broke color barriers when she was chosen for the lead in Aida with the Metropolitan Opera. After moving to Europe she gained international recognition for singing, acting, and teaching.

Davy was born on March 29, 1931 in Brooklyn, New York to immigrant parents from St. Vincent in the Caribbean. After graduation from the High School of Music and Art, she received a degree from Juilliard School (1953). By that time she had already twice (1951, 1952) received the Marian Anderson Award for young singers, established in 1943 by Ms. Anderson, who was the first black singer to appear at the Metropolitan Opera House. Davy’s singing career soon became well established in New York City and included a Town Hall presentation of Benjamin Britten’s Les Illuminations, in 1953.

In 1954 when on tour in Milan, Davy was encouraged by conductor Victor de Sabata to study the title role in the opera Aida to prepare for the La Scala Opera. That performance was cancelled because of political problems in Italy, but it led to her professional opera debut in Nice in 1957 and in Bologna, Italy and Zagreb, Yugoslavia (now Croatia) in 1958. She then returned to America for concert presentations in New York City. This finally led to her performing in Aida at the Metropolitan Opera. It was considered a major breakthrough since although the role is that of an Ethiopian princess, it had always previously been performed by white sopranos. Davy’s performance was lauded by Time Magazine which wrote, “Davy…sang her low tones with a throaty richness, her upper ones with limpid, free-flowing clarity. Davy proved that the Met is where she belongs.” Her career at the Met lasted for fifteen performances through three seasons.

After marrying Herman Penningsfield, a New York City stockbroker, in 1959, she based her professional career in Europe, making her home in Geneva, Switzerland.  The couple had one son, Jean-Marc Penningsfield who now lives in New York City.

In 1972 Davy sang at the world premiere of Hans Werner Henze’s opera Nachtstücke und Arien.  Later that year she performed in Karlheinz Stockhausen’s Momente. Although most of her professional performances continued to be in Europe, she returned periodically to the United States to perform and to teach. From 1984 to 1997 she served on the faculty of the Jacobs School of Music at Indiana University. During this period she also recorded albums of the music of Paul Bowles and Stockhausen as well as spirituals.