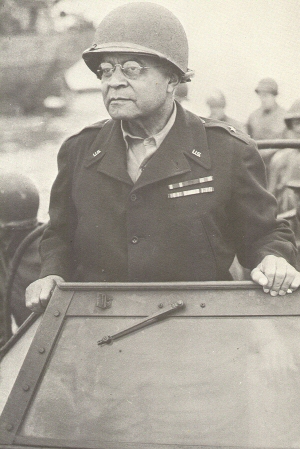 Benjamin O. Davis Sr. was the first African American to be named a general in the American military. Davis claimed to have been born on July 1, 1877, but, according to some sources, his birthdate may have been in May 1880 and that he lied about his age to enlist in the Army without the permission of his parents. Davis was born in Washington, D.C., to Louis P. H. Davis and Henrietta Stewart Davis. His father was a messenger for the Interior Department and his mother was a nurse. Davis attended M Street High School in Washington, D.C., but during his senior year, he took classes at Howard University.

Because of his cadet training in high school, Davis entered the U.S. Army on July 13, 1898, during the Spanish American War. He was a temporary first lieutenant assigned to the 8th United States Volunteer Infantry, an all-black unit stationed at Chickamauga Park, Georgia, from October 1898 until the unit disbanded in March 1899 after the end of the war. On June 18, Davis reentered the Army as a private with the 10th Cavalry (Buffalo Soldiers) and was stationed at Fort Duchesne, Utah. Within a year, Davis rose to the rank of sergeant major. He was then mentored by Lieutenant Charles Young, the only black officer in the military at that time. Young encouraged Davis to seek an officer’s commission which he received on February 1, 1901, at Fort Leavenworth, Kansas, along with another former enlisted African American, John E. Green.

In the spring of 1901, Davis received his first overseas assignment when he was sent to serve with the 10th Cavalry as second lieutenant.  He returned to the U.S. in August 1902, and over the next four decades served in a number of capacities, including professor of Military Science at Wilberforce University, military attaché in Liberia, and border patrol along the Mexican-U.S. border.

From 1917 to 1920, Davis again served in the Philippines, reaching the temporary rank of lieutenant colonel before returning to the U.S. with the rank of captain. Between 1920 and 1938, Davis served as professor of Military Science at both Tuskegee and Wilberforce again, but that year he took command of the 369th Regiment, New York National Guard, as a colonel. On October 25, 1940, he was appointed brigadier general.

Promoted general at the age of 60, Davis saw little action in World War II. During the conflict, he mostly made inspection tours of black troops in Europe. While in this role, Davis increasingly supported the desegregation of the U.S. Army. In 1947 he was appointed a special assistant to the Secretary of the Army. On July 20, 1948, President Harry Truman presided over the public ceremony in which Davis retired after fifty years of military service.

Davis married Elnora Dickerson in 1902. The couple had two children, a daughter, Olive Davis, born in 1905, and a son, Benjamin O. Davis Jr., who in October 1954 became the second African American to attain the rank of general, although in this instance in the U.S. Air Force. Benjamin O. Davis Sr. died on November 26, 1970, at the Great Lakes Naval Hospital in Chicago, Illinois, and was interred in Arlington National Cemetery.