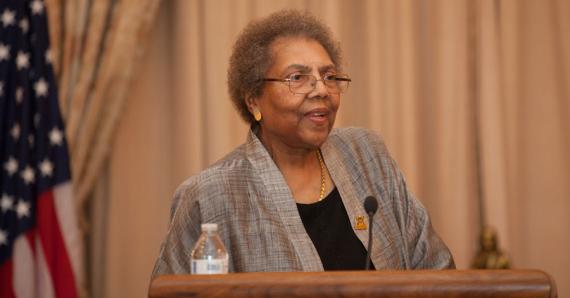 Ambassador Ruth Davis speaking after being honored by the AFSA Contributions to American Diplomacy Award at the U.S. Department of State
Courtesy State Department (Public Domain)

Although born in Phoenix, Arizona, on May 28, 1943, to a former World War II soldier who later became a postal worker and a schoolteacher mother, the family moved to Atlanta, Georgia during her early childhood.  Majoring in Sociology at Spelman College, Davis was awarded a Merrill scholarship which allowed her to study in France for 15 months. While there she travelled throughout Europe and the Middle East.

In 1969, Ruth Davis joined the Foreign Service and was assigned as Consular Officer in Kinshasa, Zaire (1969-1971). That assignment was followed by assignments in Nairobi, Kenya (1971-1973), Tokyo, Japan (1973-1976), and Naples, Italy (1976-1980). Returning to the United States as a Pearson Fellow, she worked as Special Advisor for International Affairs for the Washington, D.C. Municipal Government from 1979 to 1982 where she helped direct the Sister City Program and International Task Force.

Ensuing assignments in Washington, D.C. included U.S. Department of State Operations Center, Senior Watch Officer (1982-1984) and Bureau of Personnel, Chief of Training and Liaison (1984-1987).  She returned overseas to serve as Consular General at Barcelona, Spain from 1987 to 1991.  Ambassador Davis played a significant role in the organization of the 1992 Barcelona Olympic Games and then utilized this valuable experience to help Atlanta successfully bid for the 1996 Olympic Games.  In 1992 Davis was a member of the 34th Class of the Senior Seminar (1991-1992), the highest level of executive training offered by the U.S. government.

On August 17, 1992, Ruth A. Davis was nominated by President George H. W. Bush to be U.S. Ambassador to Benin.  After U.S. Senate confirmation, she arrived in Porto Novo, the capital, on December 24, 1992 and presented her credentials.  Davis held the ambassadorship until November 3, 1995.

Returning to the United States she served as Principal Deputy Assistant Secretary for Consular Affairs at the U.S. State Department. In 2001, following her nomination by Secretary of State Colin Powell and appointed by President George W. Bush, Ambassador Davis became the first African American Director General of the U.S. Foreign Service. She held the post from June 1, 2001 to June 30, 2003.  In 2002, she was named the first African American Career Ambassador of the Senior Foreign Service.

Succeeding appointments included Distinguished Advisor for International Affairs at Howard University (2003-2005) and Special Adviser and Chief of Staff in the Africa Bureau, Department of State (2005-2009).  Ambassador Davis retired from the Foreign Service on February 11, 2009.

In her retirement, she continues to mentor junior Foreign Service employees.  The Association of Black American Ambassadors (2014) was created in her honor.

Ambassador Davis is the daughter of Anderson and Edith Davis and the sister of Dr. Eugenia Davis Clements.