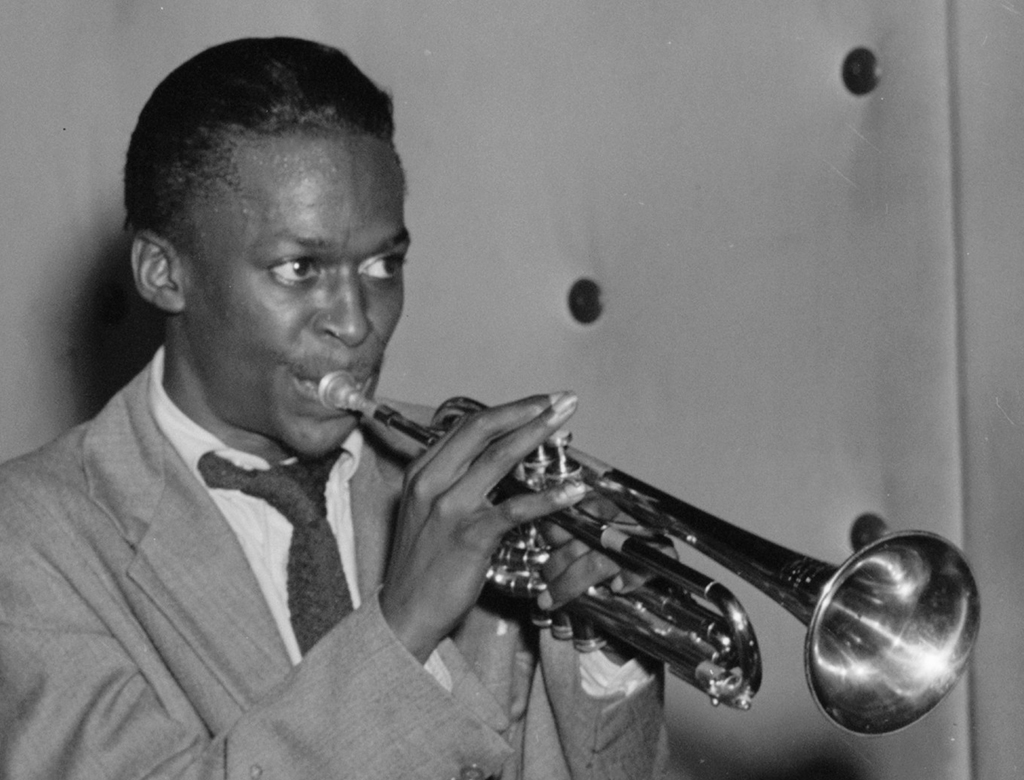 Miles Davis was one of the most influential and innovative jazz musicians of the 20th Century.  He constantly altered his sound to introduce new forms of jazz and led the progression of jazz from the 1940s to the 1980s.

Miles Dewey Davis III was born in Alton, Illinois on May 26, 1926 to a music teacher mother and dental surgeon father.  Although his mother wanted him to play violin and study classical music, “Little Miles” was fascinated with the trumpet and jazz music.  He received his first trumpet at the age of 10.  By the age of 13 was already playing professionally around St. Louis, and after graduation from high school attended the Julliard Music School in New York.

Young Davis quickly became bored with Julliard’s classical music emphasis and turned his attention to the vibrant jazz scene on New York’s 52nd Street. Acting on an earlier invitation from a meeting in St. Louis, Miles contacted saxophonist Charlie “Bird” Parker, a jazz legend, and joined his band as lead trumpet.  After dropping out of Julliard in 1945, Miles devoted himself to jazz and in particular a fast new highly improvisational form called “Be-Bop” that he soon mastered. By 1949 Davis altered his style again, recording The Birth of the Cool as part of a nine-piece band arranged by Gerry Mulligan.  His recording created a new mellower style named “cool jazz” (or West Coast Jazz).

Davis’s professional accomplishments however took a back seat to his dependency on heroin and other hard drugs.  Inspired by Sugar Ray Robinson’s similar saga, Miles Davis kicked his heroin addiction in 1954.  One year later he gave an historic solo performance at the Newport Jazz Festival that earned him a recording contract with Columbia Records.  In 1958 Davis recorded Kind of Blue, a revolutionary album that defined “modern jazz.”  For the next several years he recorded albums with some of the greatest jazz musicians including Joe Jones, John Coltrane, Cannonball Adderley, Red Garland, Herbie Hancock, and Tony Williams.

By the late 1960s Davis’s experimentation with electric guitar and keyboard in his sound gave birth to the “fusion jazz,” so called because of its fusing of rock, jazz, and funk elements.  His 1970 album Bitches Brew earned him a Grammy Award and a gold record and placed him at the height of his international fame. Davis however had returned to alcohol and drug abuse and was forced to retire in 1975.

Davis periodically returned to the stage in the 1980s, however, he refused to play earlier hits.  Only during what would be his last concert in 1991 did Davis perform old standards.  His amazing dedication to incorporating new sounds and styles into his music constantly pushed jazz to new limits that may not have been possible without him.  Miles Davis died on September 28, 1991 in Santa Monica, California at the age of 65.