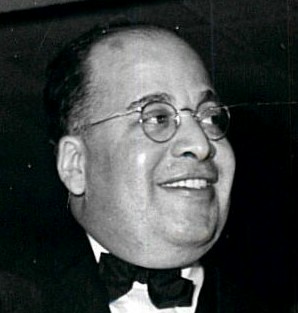 John Preston Davis was a prominent African American author, journalist, lawyer, civil rights leader, and co-founder of the National Negro Congress (1935-1946), an organization that was dedicated to the advancement of African Americans all over the country during the Great Depression. Davis was born on January 19th, 1905, in Washington D.C. He graduated from the elite, albeit segregated, Paul Laurence Dunbar High School in 1922.

Davis’ father was secretary to the assistant of the Secretary of War during World War I, and later secretary to the Presidential Commission investigating economic conditions in the Virgin Islands. His father’s success allowed Davis to attend Bates College in Maine, where he graduated with a Bachelors of Arts with honors in Psychology and English in 1926. While matriculated at Bates, Davis was president of the school’s debating fraternity, Delta Sigma Rho, and editor of the school’s newspaper The Bobcat.

After graduating from Bates, Davis enrolled in the Harvard University Law School where he met others who would become prominent including Robert Weaver, the first black cabinet officer, William Hastie, the first black federal judge, and future Nobel Prize winner Ralph Bunche.

In 1932, one year before graduating with his law degree, Davis married Marguerite DeMond, and the couple had four children, Miriam, Marguerite, Michael, and John, Jr. One year later in 1933, Davis, having recently graduated from Harvard, joined Robert Weaver to form the Joint Committee for National Recovery, an organization that lobbied for African American inclusion in New Deal federal relief programs. Davis was the Executive Secretary of the organization until 1936

In 1936 Davis co-founded the National Negro Congress (NNC). The NNC was a broad organization that sought to bring black religious leaders, laborers, politicians, businessmen, activists, and intellectuals into a single group. Around the time of its founding the organization claimed a membership of three million African Americans.  From the beginning, however, the Congress had deep ties with the American Communist Party and thus was criticized by many African Americans as well as moderate and conservative white political leaders.

In 1943, Davis’s son Michael Davis was barred from attending an all-white elementary school in Washington, D.C. leading Davis to initiate the first lawsuit challenging segregated schools in the District of Columbia. In response to Davis’ lawsuit, the US Congress, which controlled the government of the District, appropriated federal funds to construct the Lucy D. Slowe Elementary School, for African American children, directly across the street from his Davis’s neighborhood home mainly to undermine his argument for desegregated schools. His lawsuit against the District was unsuccessful.

After leaving the NNC in 1942, Davis continued his fight for the advancement of African Americans in the U.S. In 1946 he became one of the founding publishers of Our World, a national magazine specifically published for African Americans. Our World discussed contemporary black culture, entertainment, sports, issues, and other topics and showed a thriving African American community in contrast to the usual portrayals of that era.  In 1964 he served as editor of the American Negro Reference Book, a special publication by the Phelps-Stokes Fund, a nonprofit organization, to describe everyday black life in the United States.