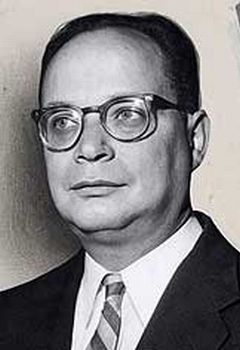 Educator and civil rights advocate John A. Davis Sr. began his career in activism in the 1930s as leader of the New Negro Alliance, which pressured businesses to hire black employees. Two decades later he assisted with the Brown v. Board of Education Supreme Court case. He also was chairman of the department of political science at City College of New York.

John Aubrey Davis was born in Washington D.C. on May 10, 1912 to John Abraham Davis and Gabrielle Dorothy Beale Davis. He is best known for serving between 1953 and 1954 as the principle researcher on the Brown v. Board of Education Supreme Court case. Working alongside lead consul and future Supreme Court justice Thurgood Marshall as well as over 200 other academics, Davis gathered legal and historical facts for argument for the National Association for the Advancement of Colored Persons (NAACP) Legal Defense and Educational Fund team of attorneys.

This was neither Davis’s first encounter with the Supreme Court nor with Thurgood Marshall. In the 1930s, Davis led an organization called the New Negro Alliance, which fought discrimination in Washington, D.C. This organization staged its most famous protest in August 1933 against Hamburger Grill, a restaurant known to hire then quickly fire black employees while maintaining an all-white staff despite the fact that most of the white-owned establishment’s customers were African Americans. The Davis-led protest resulted in the restaurant hiring its first permanent black employees two days after the protests began.

The New Negro Alliance quickly spread its influence throughout the greater D.C. area and began picketing other racially discriminatory businesses under the national campaign “Don’t Buy Where You can’t Work.” This group’s protests pressured a number of white-owned businesses to begin hiring black workers. In 1938 following an injunction by other white-owned businesses, the Supreme Court upheld the Alliance’s right to picket in the New Negro Alliance v. Sanitary Grocery Company Inc. case. Thurgood Marshall successfully defended the Alliance before the Supreme Court.

Davis continued his academic work alongside his activist efforts. He graduated from Williams College in 1933 and received an M.A. from the University of Wisconsin the following year. In 1936 he received a Rosenwald Foundation fellowship to complete his doctoral work at Columbia University, earning his Ph.D. in 1949.

He taught political science at Howard University, and in 1935 became a full professor at Lincoln University. In 1953 he joined the political science department at City College of New York as associate professor, becoming one of only about two dozen black faculty at predominately white institutions in the United States. He eventually became chair of the department. He retired in 1980.

Davis was the brother of William Boyd Allison Davis, a prominent 20th century anthropologist. John A. Davis Sr. died at the age of 90 on December 17, 2002 in Scottsdale, Arizona. He was survived by two sons, John A. Davis Jr., and Smith W. Davis. His wife Mavis died in 1993.