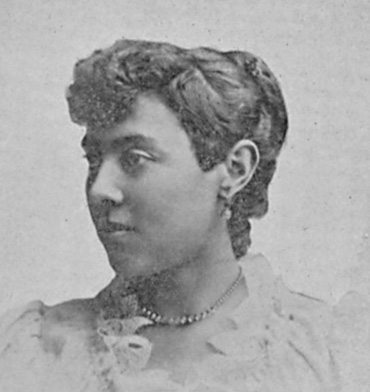 Henrietta Vinton Davis was an American elocutionist, dramatist, and impersonator. She was also considered to be the physical, intellectual, and spiritual link between the abolitionist movement of the Frederick Douglass era and the African Redemption Movement of the Universal Negro Improvement Association and African Communities League (UNIA-ACL).

Davis was born in Baltimore, Maryland, on August 25, 1860, to Mansfield Vinton and Mary Ann (Johnson) Davis. Shortly after Davis was born, her father died and soon after her mother remarried George A. Hackett. He died in April 1870 after a short illness, and Mary Ann Hackett moved her daughter to Washington, DC where she was able to receive her public school education. At fifteen, Davis passed the teacher examination and began teaching in Maryland public schools.

In 1878 Davis became the first African American woman employed by the Office of the Recorder of Deeds in Washington, DC. Here she met Frederick Douglass who held the position of Recorder of Deeds from 1881 to 1886. Davis shared her theatrical interests and talents with Douglass and subsequently began her stage career at the age of twenty-two on April 25, 1883, when she was introduced by Douglass before an integrated theater audience. During the summer of 1883, Davis toured in Boston, Worcester, and New Bedford, Massachusetts; Providence and Newport, Rhode Island; Hartford and New Haven, Connecticut; and New York City and Albany, New York.

Davis’s performances consisted of a diverse spectrum of works from Paul Lawrence Dunbar’s Negro dialects to Shakespeare’s Romeo and Juliet and As You Like It, The Battle by Friedrich Schiller, and How Tom Sawyer Got His Fence Whitewashed by Mark Twain. Davis is considered the first African American to have performed Shakespearian plays since Ira Aldridge. In 1893 Davis began her own theatrical company in Chicago and began touring across the U.S., and on one occasion, she and her company traveled the Caribbean to perform. By 1900 Davis began collaborating with leading journalist and future member of the Universal Negro Improvement Association, John Edward Bruce.

Davis first learned of the work of Marcus Garvey and the UNIA while traveling the Caribbean in 1917 and 1918. She was so impressed with the Garveyites that in 1920, at the age of sixty, she gave up her stage career to work full-time for the UNIA. Davis became the organization’s first international organizer, a director of Black Star Line, and the second vice-president of the Negro Factories Corporation. She was also one of the signatories of the Declaration of the Rights of the Negro Peoples of the World at the UNIA-ACL Convention in New York City in August 1920. By 1921 Davis had become the fourth assistant president-general of the UNIA after she established UNIA divisions (branches) in Cuba, Guadeloupe, the Virgin Islands, Haiti, Trinidad and Tobago, and Jamaica.

In 1929 two years after Garvey was deported to Jamaica, Davis was selected UNIA Secretary General. Three years later, in 1932, she broke away from the declining organization and became first assistant president general of the rival UNIA, Inc. In 1934 she was elected the president of the organization. Henrietta Vinton Davis died on November 23, 1941, in Washington, DC at the age of eighty-one.