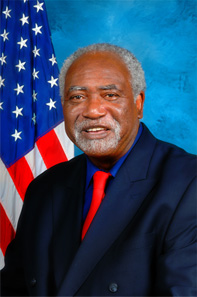 Danny K. Davis was born in Parkdale, Arkansas on September 6, 1941, the son of a sharecropper. He received a B.A. in history from Arkansas A.M. & N. College in 1961 and then moved to Chicago. In 1968 he earned an M.A. from Chicago State University and a Ph.D. degree from the Union Institute and University in Cincinnati, Ohio.

After becoming involved in the Chicago civil rights movement in the 1960s, Davis served as a consultant for many public service organizations and as an educator in area universities. He was executive director of the Greater Lawndale Conservation Commission, director of training at the Martin Luther King Neighborhood Health Center, and executive director of the Westside Health Center. He also was an Alderman of the 29th ward on the Chicago City Council and served on the Cook County Board of Commissioners. In 1991 he made an unsuccessful run for mayor of Chicago.  Five years later in 1996, he decided to run for the Congressional seat on Chicago’s west side.  Davis was elected to represent Chicago’s 7th District and has served in Congress since then.

Congressman Davis, a member of Alpha Phi Alpha Fraternity, currently lives in the Westside of Chicago with his wife Vera G. Davis and their two children.