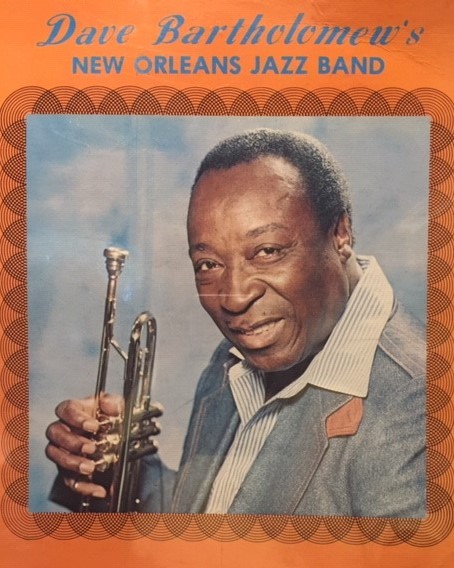 David Louis Bartholomew was best known for his collaborations with Fats Domino, writing or co-writing a string of hits including “Ain’t That A Shame” and “I’m Walking.” He was one of the most influential promoters of 20th Century New Orleans-style music, particularly during the 1950s and 1960s.

David Louis “Dave” Bartholomew was born on December 24, 1918 in Edgard, Louisiana, the first child of four and the only son born to Mary Roussell and Louis Bartholomew. He grew up on a plantation near Edgard, forty miles northwest of New Orleans where he cut sugar cane. His father played bass horn and tuba in local bands. Dave followed in his father’s footsteps first learning to play the tuba, but switched to the trumpet when he heard Louis Armstrong playing on the radio.

In his early teens, Bartholomew met legendary musician Peter Davis who was a customer at Bartholomew’s father’s barbershop. Soon afterward he would start taking trumpet lessons from Davis. Bartholomew began his professional career in 1939 with Fats Pichon’s brass band and other bands in New Orleans. He even played 1st trumpet with the legendary Jimmie Lunceford’s band in 1942.

Bartholomew enlisted in the U.S. Army in 1942. While there he developed skills in writing and arranging music with the 196th Army Ground Forces Band. After his release from the service and return to New Orleans in 1945, Bartholomew formed “Dave Bartholomew and the Dew Droppers” named after the famed Dew Drop Inn, which was a hot spot for African American entertainment in New Orleans. Bartholomew became the resident bandleader and over the years performed with Ray Charles, James Brown, Sam Cooke, Ike and Tina Turner, and Otis Redding, all of whom performed at the Dew Drop Inn.

Dave Bartholomew’s career, however, was mostly associated with the music of Antoine “Fats” Domino. Bartholomew met Domino in 1949 and soon afterwards he wrote “The Fat Man” which was Domino’s first hit, reaching number 2 on the R&B chart and selling over one million copies. Bartholomew next co-wrote and produced with Domino a string of hits including “Ain’t it A Shame;” (1955) “Blue Monday;” (1956), I’m Walking” (1957); and “I’m Gonna Be A Wheel Someday” (1959). He also co-wrote and produced Domino’s hits “Blueberry Hill” (1956) and “Walking To New Orleans (1960).

Bartholomew also wrote, arranged, and produced recordings with other artists including T-Bone Walker and influenced the career of Little Richard. Several of Bartholomew’s songs including “I Hear you Knocking,” and “Let the Good Times Roll” which were covered by Pat Boone, Elvis Presley and Ricky Nelson.