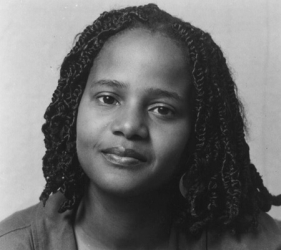 American novelist Edwidge Danticat was born in Port-au-Prince, Haiti on January 19, 1969.  Like many Haitian families, her parents fled her homeland for the United States to escape the Jean-Claude Duvalier regime, leaving Danticat and her brother in Haiti for the time being. In 1981, when she was twelve years old, she and her brother moved to Brooklyn to be reunited with her parents and her two youngest siblings.

Danticat attended Barnard College where she received her BA degree in French Literature in 1990.  During her time at Barnard College, she published a number of short stories in magazines such as Essence and Seventeen.  She received an MA degree at Brown University in 1993 and later used her thesis as the basis for her first novel, Breath, Eyes, Memory, which explored the immigration process to America from a child’s point of view.

In 1995, Danticat published Krik? Krak!, a collection of her short stories, which won her the Pushcart Short Stories Prize. The anthology was also a finalist for the National Book Award for that year.   Breath, Eyes, Memory was released in 1998 and soon afterward featured by Oprah’s Book Club.  A year later she released her second novel, The Farming of Bones, which recounted the 1937 massacre of Haitian cane workers in the Dominican Republic then ruled by President Rafael Trujillo.

Danticat’s works have been translated into French, Spanish, German, and Dutch.  Her novel The Farming of Bones won the 1999 Prix Carbet award in France. Her recent works include a children’s book, Behind the Mountains, which was published in 2003; The Dew Breaker, a novel published in 2004; Anacoana, a young-adult novel published in 2005; and Brother I’m Dying, published 2007 in honor of her uncle Joseph Danticat, who was her guardian in Haiti.  Her most recent honors include the prestigious John D. and Catherine T. MacArthur Foundation “Genius Award” in September 2009.

Danticat’s writings combine the cultural and economical experiences in Haiti and America.  Her concern for Haitian immigrants led her to work with the National Coalition for Haitian Refugees (NCHR) which fights for immigration rights for Haitians in the United States.  She has collected books to send to Haitian schools and visited American schools with a heavy population of Haitian students.