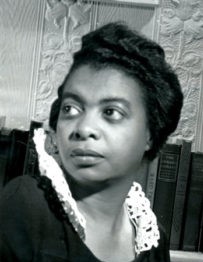 Margaret Esse Danner was an African American poet, born in Pryorsburg, Kentucky on January 12, 1915 to Caleb and Naomi Esse.  Danner began writing poetry when she was in junior high school. In the eighth grade she won first place for a poem she wrote titled “The Violin.”  Her family moved to Chicago when Margaret began high school.

Danner later attended Loyola and Northwestern universities, where she was taught by Karl Shapiro and Paul Engle. She continued her writing while in Chicago and first became recognized in 1945 when she won second place in the Poetry Workshop of the Midwestern Writers Conference at Northwestern University.  In 1951, while in Chicago, Danner become an editorial assistant for Poetry: the Magazine of Verse. It was this publication that introduced her poem series “Far From Africa” for which she is best known.  These poems won Danner the John Hay Whitney Fellowship in 1951, which was intended to fund a trip to Africa scheduled for that same year.  Danner postponed the trip for personal reasons and in fact did not go to Africa until 1966.  In 1955, Margaret Danner became the first African American to hold the position of assistant editor of Poetry: The Magazine of Verse.

During her lifetime, Margaret Danner was married twice and had one daughter with her first husband. A number of her later poems were inspired by her grandson, Sterling, who she referenced as “Muffin Poems.” In 1961, Danner became poet-in-residence at Wayne State University in Detroit.  It was during this time that Danner became involved in the Baha’i faith, which influenced her poetry.  From that point many of her poems would referred to that faith.

Margaret Danner’s collection of works includes five books, one of which she co-wrote with another American poet, Dudley Randall. Her works are also included in a number of anthologies.  Her writing has been called a celebration of black people, their history, as well as their struggles.