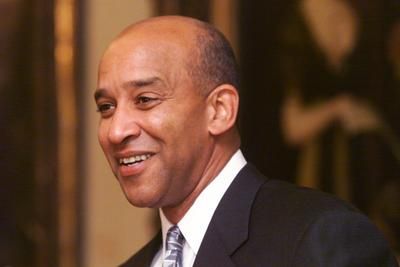 Preston Daniels, the first African American elected Mayor of Des Moines, Iowa, was born in Chicago, Illinois in 1945.  Shortly afterwards his parents moved to Des Moines and he grew up in the Chesterfield section of southeast Des Moines, a working-class area also known as the “southeast bottoms.”

After graduating from high school in 1963 he served four years in the United States Army, and was honorably discharged at the rank of Sergeant. Daniels returned to Des Moines and received his Bachelor of Science Degree in Psychology from Drake University in 1971.  Daniels also obtained his Master of Science Degree in Health Science from the same institution in 1972.

Preston Daniels met his wife, Patty, during his time studying at Drake University.  They married and have one son, Preston A. Daniels II.  The Daniels family became involved in community activism in the early 1970s when they lived near the university.  Patty Daniels became president of the Drake Neighborhood Association, a group of concerned residents who formed the second oldest nonprofit neighborhood association in the city. The new Association focused on preserving and restoring the historic housing stock in central Des Moines by working with the city on code enforcement and encouraging many of the owners of older homes to convert their now multiple family apartments back to single-family dwellings.

After working as a community activist for housing reform, in 1991 Preston Daniels entered local politics and became the first African American elected to the Des Moines City Council. He won the at-large seat on the Council based on a campaign centered on what he called City Hall’s historic neglect of the neighborhoods in favor of downtown development.

Daniels became a political ally of popular mayor Arthur Davis.  When Davis died in office in 1997, Daniels decided to run for the office in the special election to fill Davis’s unexpired term.  After winning an upset victory over wealthy cable television network owner Jim Cownie in the Democratic Primary, he attracted the support of organized labor and Iowa Senator Tom Harkin for the November general election.  Now Daniels faced Cownie again, this time as the Republican candidate for mayor.  Daniels handily defeated Cownie a second time to become the city’s first black mayor.

Daniels was reelected to a four-year term in November of 1999. While serving as mayor, he hosted a local radio show.  The Preston Daniels Show aired on KFMG 99.1 on Mondays from 12:00 to 2:00 pm.  Daniels used the radio show to communicate to his constituency about City Hall issues.  Daniels did not seek re-election when his term in office ended in January 2004.

After leaving public office, Daniels was hired as the Program Director for the Employee and Family Resource’s (EFR) Court and Community, a non-profit agency that helps individuals and families with substance abuse issues.  In 2009, Iowa Governor Chet Culver appointed Daniels Director of the Iowa Department of Human Rights (DHR).  He held that post until 2011. Preston Daniels and his wife, Patty, continue to live in Des Moines.