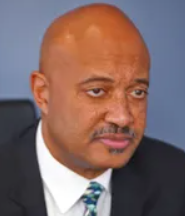 Curtis Theophilus Hill Jr. is a prosecutor who serves as the 43rd Attorney General of Indiana. Hill was born in Elkhart, Indiana on February 21, 1961 and raised there. He graduated from Elkhart High School and then Indiana University with a degree in Marketing. He received his Juris Doctoral degree from Indiana University School of Law in 1987.

Early in his career, Hill served as a part-time deputy prosecuting attorney for Elkhart County where he also maintained a private law practice. In 2002, Hill ran for his first public office, and was elected Elkhart County Prosecutor. Thereafter, Hill won four consecutive elections as Prosecuting Attorney with nearly 80 percent of the vote. With more than 1.64 million votes, Hill was elected Attorney General for the State of Indiana in 2016 receiving the largest number of votes of any elected official in Indiana history. He took office as Attorney General on January 9, 2017.

As Attorney General Hill’s conservative views attracted national attention and he was seen as a rising star in national Republican politics. Hill opposed additional early voting locations in Marion County, the state’s most populous county and a heavily Democratic area. He criticized the Black Lives Matter Movement and professional athletes who engaged in protest. He also opposed the legalization of marijuana and free needle exchanges and called for harsher penalties for drug offenders.

In July 2018, Hill was accused of sexual misconduct by four women, urging other state officials to call for his resignation. Hill denied the allegations and called for an independent investigator to examine them. Later that month a Marion County Superior Court judge appointed a Special Prosecutor to investigate the allegations against Hill. Although Hill tried to block the appointment, the Special Prosecutor, Daniel Sigler, announced in October 2018 that while he found the allegations credible, there was insufficient evidence to convict Hill of a crime.

Beginning in October 2019, the Indiana Supreme Court Disciplinary Commission investigated the sexual misconduct charges and in December 2019, the Commission called for the suspension of Hill’s law license for two years. On May 11, 2020, the Indiana Supreme Court found that Hill had committed a misdemeanor battery in violation of the Rules of Professional Conduct in regard to the sexual misconduct charges. His bar license was suspended for thirty days, beginning May 18, 2020 and ended June 17, 2020. The Chief Deputy Attorney General assumed Hill’s position until his automatic reinstatement on June 17.

Meanwhile the Republican Party leadership began to campaign for Hill’s removal. On May 12, 2020, Indiana Governor Eric Holcomb filed an emergency motion with the Indiana Supreme Court asking whether Hill’s suspended law license created a vacancy which would allow the Governor to appoint someone for the position. The Court denied the Governor’s request on May 18, 2020. In July Hill campaigned for re-election as Attorney General of Indiana but the Indiana State Republican Convention instead nominated Todd Rokita for the post of Indiana Attorney General. Hill’s term ends on January 11, 2021.

Hill has served on numerous boards and committees including the Elkhart County Historical Society, the Greater Elkhart Chamber of Commerce, Vice Chair of the Midwest Region for the National Association of Attorneys General. Hill has also performed on stage in a variety of local community theater productions, including recurring roles as the King of Siam in The King and I. Hill and his wife Teresa have five children.