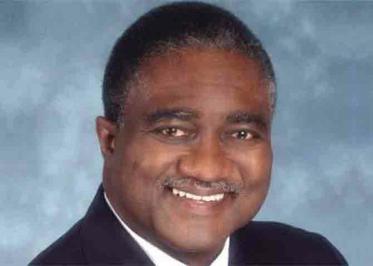 George Edward Curry was an American journalist who was considered by many of his colleagues the “dean of black press columnists” because of the number of his weekly commentaries which enjoyed wide syndication. Curry was born on February 23, 1947, in Tuscaloosa, Alabama, to Martha Brownlee Curry and Homer Lee Curry. His mother was a domestic worker and his father was a mechanic. Curry attended Druid High School in Tuscaloosa and then Knoxville College where he was the quarterback and co-captain of the football team. He was also editor of the school newspaper’s sports section and served as the student member of the college board of trustees. Curry also studied at Yale and Harvard University during two summers while still attending Knoxville College.

From 1993 to 2000, Curry was editor-in-chief of Emerge. His most important article appeared in May 1996 when he published a seventeen-page story entitled “Kemba’s Nightmare.” The story described Kemba N. Smith, who had been sentenced to twenty-four years in prison for a minor drug incident. President Clinton pardoned her in 2000 after talking with Curry. Emerge won over forty national journalism awards under Curry’s leadership.

In 2000 Curry began working with the National Newspaper Publishers Association (NNPA), which is the leading organization of black newspapers.  His work there ranged from hearing oral arguments before the U.S. Supreme Court to visiting Doha, Qatar, to write about the Iraq War. In 2001 Curry became the editor-in-chief of NNPA in Washington, D.C. The columns he wrote weekly in his role as editor were published in more than two hundred African American newspapers across the nation. On March 15, 2007, Curry resigned as editor of NNPA’S news service to found and lead the St. Louis Minority Journalism Workshop and the Washington Association of Black Journalists. Curry was a trustee on many boards, including Knoxville College, the Kemba N. Smith Foundation, St. Paul Saturdays, and Young D.C.