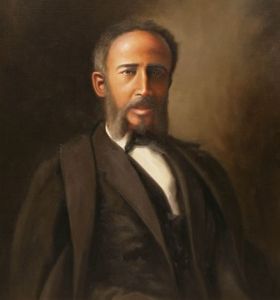 Born in 1842, in Williamson County, Tennessee, Green I. Currin (sometimes referred to as G.I. or Jacob Curran) was the first African American to serve in the Oklahoma Territorial Legislature, winning election to its inaugural session in 1890. During the territorial period, Currin also served as a U.S. deputy marshal and as regent of the Colored Agricultural and Normal University (now Langston University) in Langston, Oklahoma.

Currin’s political career began in Kansas, where he arrived in the late 1870s as part of the Exoduster movement. In the 1880s he lived in Topeka where he worked for the city police department. In 1888 he was the Republican nominee for police judge but did not ultimately win election to the office. Shortly thereafter Currin left Kansas, moving south to what was then known as the Oklahoma District and participating in the famous Land Run of 1889. Currin was familiar with the District having served as vice president of the Oklahoma Immigration Association, an organization that supported black settlement in the region. Upon arriving, Currin obtained a claim in Kingfisher County.

The Land Run hastened the creation of the Oklahoma Territory in 1890. Currin ran for and won election to the Territorial Legislature, serving in the lower house called the Assembly. While in office he introduced a civil rights bill, the first such piece of legislation to be considered in the Territory. Aimed at decreasing attacks against African Americans, it included penalties for racial violence. The bill passed in the Assembly but failed in Territorial Senate by a single vote.

Currin did not run for reelection and never again held elected office. Following his term in the legislature he served as U.S. marshal and was appointed to the Colored Agricultural and Normal College Board of Regents. His aspirations for public office were blocked by the rise to power of the Democrats who introduced legislation designed to reduce the African American political participation including the “grandfather clause” in 1910. The U.S. Supreme Court ruled the amendment unconstitutional in the case Guinn v. United States (1915). After that ruling, however, other measures were put in place to deny African Americans voting rights.

During the last decades of his life, Currin held the position of grand master of the St. John Grand Lodge, A. F. & A. M. Masonic Order of Oklahoma. He and his wife Caroline had five children. Green I. Currin died in Dover, Oklahoma on October 21, 1918.