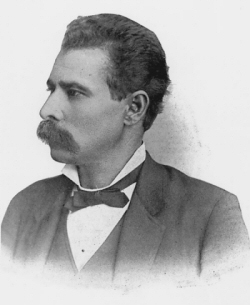 Norris Wright Cuney, politician, the fourth of eight children born to a white planter, Philip Minor Cuney and a slave mother, Adeline Stuart, was born on May 12, 1846, near Hempstead, Texas.   Cuney studied law and by July 18, 1871, was appointed president of the Galveston Union League.  He married Adelina Dowdie on July 5, 1871, and to their union was born a son and a daughter.

In 1873 Cuney was appointed secretary of the Republican State Executive Committee.  He was defeated in the race for mayor of Galveston in 1875, and for the state House and Senate in 1876 and 1882 respectively, but in appointed offices and as a dispenser of patronage, Cuney was powerful.  From his appointment as the first assistant to the sergeant-at-arms of the Twelfth Legislature in 1870, he went on to serve as a delegate to every national Republican convention from 1872 to 1892.  He became inspector of customs of the port of Galveston in 1882, and collector of customs for the port in 1889.

In 1883 Cuney was elected alderman on the Galveston City Council.  Three years later he became Texas national committeeman of the Republican Party, the most important political position given to a black man of the South in the nineteenth century.  One historian of the Republican Party in Texas characterizes the period between 1884 and 1896 as the “Cuney Era.”   Cuney died in Galveston in 1898 at the age of 52.