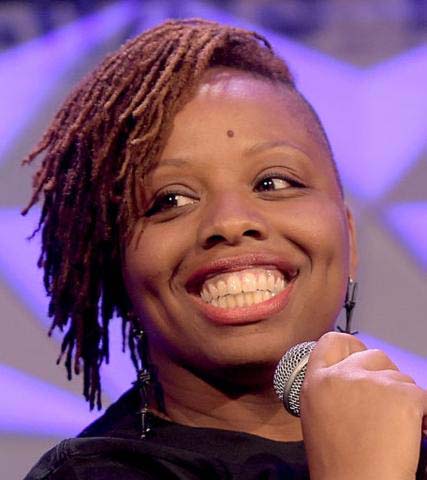 Writer, activist, and artist Patrisse Cullors, is most well-known as one of the three founders of the Black Lives Matter (BLM) movement. Cullors was born in 1984 in Los Angeles, California and grew up in the Pacoima neighborhood of the San Fernando Valley. Her mother, Cherisse Foley, raised Cullors and her siblings as a single parent. At the age of 16, Cullors revealed her queer identity to her family and moved away from Los Angeles.

Early on Cullors identified as an activist; she joined the Bus Riders Union as a teenager.  In 2007 at the age of 22, she received the Mario Savio Young Activist Award. Cullors then received a Fulbright Scholarship which allowed her to get a degree in religion and philosophy from University of California, Los Angeles (UCLA) in 2012. Later that year, Cullors created her first piece of performance art that tackled the issue of the violence of incarceration. This performance helped to create the Coalition to End Sheriff Violence and her non-profit, Dignity and Power Now.

In 2013, Cullors, Alicia Garza, and Opal Tometi created the Black Lives Matter movement. This movement was inspired the February 26, 2012 fatal shooting of unarmed black teenager Trayvon Martin by neighborhood security guard George Zimmerman in Sanford, Florida.  Inspired in part by seeing her own brother brutalized during imprisonment in Los Angeles County jails, Cullors wrote the social media hashtag #BlackLivesMatter to promote the new organization. The BLM movement works to end violence against African Americans as well as poverty and mass incarceration, which contributes to violence. Cullors is especially passionate about fighting for rights for the black queer community.

In 2014, Cullors received the Contribution to Oversight Award from the National Association for Civilian Oversight of Law Enforcement (NACOLE) in response to her work encouraging civilian oversight in Los Angeles jails. She is part of the small but growing prison abolition movement. Later in 2014 Cullors completed a fellowship at the Arcus Center for Social Justice Leadership at Kalamazoo College in Kalamazoo, Michigan. In 2015, she was awarded the Social Justice Grant by Google to support her project through the Ella Baker Center for Human Rights in Oakland, California.  The project called the Justice Teams for Truth and Reinvestment, allows communities to respond radically to law enforcement violence. In 2016, Cullors married transgender activist Janaya Khan. Cullors currently teaches at Otis College of Art and Design in Los Angeles.

Patrisse Cullors has received several honors for her work. Some of these awards include NAACP History Maker, Civil Rights Leader for the 21st Century from the Los Angeles Times, Senior Fellow for Maternal Mortality by MomsRising, the Defender of the Dream Award from the AFL-CIO Executive Council Committee on Civil and Human Rights, and the Justice Award from National Center for Lesbian Rights. Cullors and the other two founders of Black Lives Matter have received recognition from Fortune and POLITICO in 2016 for being among the 50 greatest leaders and in 2017 they received the Sydney Peace prize in Sydney, Australia. Cullors was also awarded honorary doctorates from Chicago’s South Shore International College and Clarkson University in Potsdam, New York. In 2018, Cullors released her book called When They Call You a Terrorist: A Black Lives Matter Memoir.