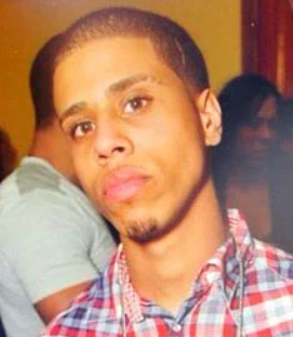 Twenty-year-old Reynaldo Cuevas’s life was cut short by an NYPD officer as he fled an armed robbery in his place of business. Cuevas was born on January 6, 1992 in the Dominican Republic. The son of Ana and Reynaldo Cuevas, his family came to the United States when he was a child to become citizens and establish a business.

On September 7, 2012, Cuevas and his uncle, Felix Mora, were inside their Bronx, New York store, Natalie Grocery, about to close for the evening. At about 2 a.m., armed robbers came bursting through the front door, holding Cuevas and his uncle hostage as they ransacked the register and store while stuffing a backpack. Mora was able to push the silent alarm before being attacked.  Cuevas had only been working for his Uncle Felix for a few months. He was trying to save money to bring his three-year-old daughter from the Dominican Republic to be with him. Cuevas was also in the process of enlisting in the military in the hopes of joining his sister, Nicole Cuevas, who was already enlisted in the Marines.

When an opportunity arose, Mora ran out of the store with his hands on his head. Cuevas ran out behind him but tripped on the sidewalk and fell towards New York City Police Office Ramysh Bangali who turned and shot Cuevas in the torso thinking he was a suspect. Cuevas was unarmed. He was taken to St. Barnabas Hospital where he was pronounced dead.

Six months after Cuevas’s death, the family filed a wrongful death claim, suing the city of New York, the NYPD, and Officer Bangali for $25 million. They also urged the courts to charge the three men responsible for the robbery (Orlando Ramos, 32, Ernesto Delgado, 28, and Christopher Dorsey, 17) with felony murder for allegedly causing the accidental death of Cuevas. Officer Bangali claimed that Cuevas fell into him, causing his weapon to accidentally discharge.

The three assailants were charged with robbery, burglary, and murder in the second degree, or felony murder, for allegedly causing Cuevas’ death as they committed a crime. All three pleaded not guilty. If convicted, the men could face up to twenty-five years in prison. Officer Bangali never faced any charges, but Dorsey changed his plea to guilty in September of 2015. He received 10 years for his part in the robbery.

Sadly, the Cuevas family are no strangers to tragedy. Just two years earlier, Cuevas’s father was shot to death in a robbery in the Dominican Republic. Cuevas is remembered by his family and friends as being a hard worker, an avid sports fan, playing basketball and watching Yankees baseball games, and as a loving father.