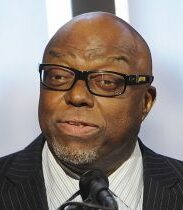 Stanley Crouch was a tough-minded and controversial jazz critic, playwright, essayist, novelist, and percussionist.  After a personal intellectual transformation in the late 1970s, Crouch became the contemporary champion of traditionalist jazz – an identity which he defined with both powerful cultural criticisms and outbursts of intellectual and physical combativeness.

Stanley Crouch was born in Los Angeles, California in 1945.  His mother, Emma Bea Crouch, supported his family financially and intellectually.  Asthma kept Crouch confined to his home for much of his childhood, a period which he spent reading and listening.  By the time of his high school graduation in 1963, Crouch had independently read the complete works of Hemingway, Twain, and Fitzgerald, while also founding a school jazz club which explored the works of artists Sonny Rollins, Charlie Parker, Thelonious Monk, and Eric Dolphy, among others.

Crouch attended two separate junior colleges for the next three years, receiving a degree from neither.  It was during this period, however, that Crouch became interested in poetry and drama, being particularly influenced by poet and playwright LeRoi Jones (later Amiri Baraka).  After the eruption of the Watts Riot of 1965, Crouch became informally involved in the Watts Writers Workshop, often performing at the Watts Happening Coffee House.  From 1965 until 1967 Crouch was a member of Studio Watts, a local repertory theater.

In 1968, Stanley Crouch began a seven-year-long relationship with the Claremont Colleges, entering as a poet-in-residence and eventually obtaining a position in the English Department of Pomona College.  By 1975, however, ever-restless Crouch ventured to New York City with friend and tenor saxophonist David Murray, with whom Crouch would share a loft above the Tin Palace nightclub.  After several years of booking and performing at the Tin Palace, Crouch grew disdainful of the limited reach and financial opportunities of his artist lifestyle.  Further spurred by developing relationships with writers Albert Murray and Ralph Ellison, Crouch came to reject the ideologies of black nationalism and the jazz avant-garde, the movement upon which he had built his early career.  Crouch solidified his political and cultural transformation as a staff writer at the Village Voice.  After eight years at the Voice, in 1988, Crouch was fired following a fistfight with peer Harry Allen – the sort of violence for which Crouch became legendary in the jazz world.

Shortly thereafter, however, Crouch released the essay collection Notes of a Hanging Judge (1990), which was met with great critical approval and led to his being awarded both a Whiting Fellowship and a MacArthur Grant.  In 1991, Crouch became the artistic consultant to the hugely successful Jazz at Lincoln Center program, working closely with protégé and trumpeter Wynton Marsalis to help define jazz, if narrowly, for a new generation.

In 1995, Crouch released his National Book Award nominated collection The All-American Skin-Game.  Throughout the 1990s Crouch’s hostile denunciations of the separatist “excesses” of hip-hop culture, black radicalism, gay-rights, and feminism continued to draw controversy and exacerbate his many critics.  More recently, Crouch served as an artistic advisor to Ken Burns’s 2001 documentary series Jazz and continued to work, as he had for over two decades, on a definitive biography of Charlie Parker.